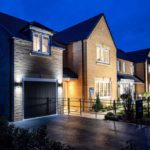 A housing developer has sold all the homes at a new development in Yarm.

Construction work is now entering the final stages at Bellway’s Conyers Green, off Green Lane in the town.

The housebuilder is delivering 168 houses for private sale at the development, as well as 33 affordable properties for rent or shared ownership.

Oliver Wray, Sales Manager for Bellway Durham, said: “Conyers Green has proved to be an incredibly popular development with local buyers keen to move into a new home but stay in the area to be close to friends, family and work.

“Yarm is a charming town and has good transport links for people needing to get to work further afield. One of the major attractions of living at Conyers Greens is that the development is only a short walk from Yarm railway station which has direct trains to Middlesbrough, Northallerton and York.

“Another attraction for buyers was the high quality of the homes at the development, which have been built to the high standards you would expect from a five-star housebuilder. The mix of three, four and five-bedroom homes have catered for a wide range of budgets, attracting everyone from first-time buyers and young professionals to families and downsizers.

“While it is too late to buy a new house at Conyers Green, there is an opportunity for those who missed out to secure a Bellway home at one of four other sites within around 10 miles of this development.

“Anyone looking for a well-built new home in Teesside or County Durham should get in touch with our sales team and they can talk through the possible options.”

Bellway Durham is currently building new homes at eight sites in the North East – five in Teesside and three in County Durham.

Bellway was awarded five-star status by the Home Builders Federation (HBF) for the fifth successive year in 2021 after more than 90 per cent of customers surveyed said they would recommend the housebuilder to a friend or family member.

For more information about homes being built by Bellway Durham, visit bellway.co.uk/new-homes/durham.