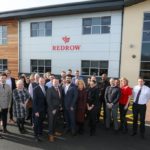 An East Midlands housebuilder has relocated its head office to accommodate an exponential growth in business – just in time to mark its third anniversary.

Redrow Homes East Midlands, which was created in January 2017 and is currently building housing developments across Derbyshire, Leicestershire and Staffordshire, has moved into a purpose-built office, which is double the size of the previous workplace.

Originally situated in the centre of Derby, the division has moved 10 miles to Castle Donington, which is near its very own development, Foxbridge Manor.

The building’s increase in size reflects the company’s own expansion and success. Since the division’s conception three years ago, Redrow Homes East Midlands has created over 1,200 jobs* for local people, grown its division three-fold, and built 503 homes across the region.

Martyn Pask, Managing Director of Redrow Homes East Midlands, said: “Our new offices provide a solid foundation for the division to expand further, so the move could not have come at a better time. With seven developments now live across the East Midlands, new ones opening very soon, and over 300 homes planned to be built this year, our division is thriving and I’m proud of its recent successes.

“It became clear very quickly over the last year that our previous premises were becoming too small to meet the business’ requirements. We chose Castle Donington for our head office because it places us in the centre of the three biggest cities in the East Midlands – Nottingham, Derby and Leicester – which allows us to be at the heart of the communities we’re helping to develop.

“It was also especially important to us that the building itself and the purpose-built facilities allowed our team to feel happy and comfortable in their environment, which will ultimately assist them in helping our buyers to create a better way to live.”

Redrow Homes is building a range of developments across Derbyshire, Staffordshire and Leicestershire, offering two, three, four and five-bedroom homes, suited for families, couples and those looking to rightsize. Developments across the East Midlands offer great transport links, providing the perfect balance between town and country life.