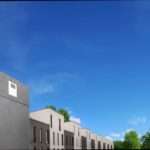 Here, Tony Kirby, sales director at Warmafloor, explains what district heating is and how it is set to change the landscape of heating for good.

When it comes to tackling the issue of climate change, the type of heating installed within residential and commercial buildings has a fundamental role to play. As the UK government focuses on putting regulations in place to move away from traditional gas boilers, many builders and developers are exploring new options and systems, like district heating.

District heating, also known as a heat network, is an efficient and eco-friendly method of large-scale heating, most commonly used in high-rise apartment blocks and communal living. Rather than heating up several individual boilers, heat is generated through one single centralised boiler and heat pump. This is then distributed to multiple units or apartments at once through individual ‘heat interface units’ (HIUs) and underground pipework, which uses much less energy than when individual boilers are used for each property. This is really important when it comes to lowering carbon emissions across the UK and is a key reason why district heating is becoming so popular. 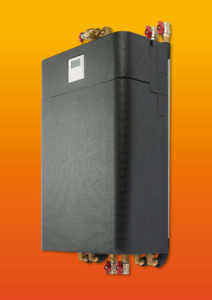 It’s been recently reported by the Department of Energy and Climate Change that heat networks are recognised as the UK’s third major energy network, with approximately 55,000 district heating units being installed each year in the UK. This rise in popularity is no surprise considering the benefits district heating can have for developers, installers and end-users.

As well as being more efficient, district heating is also an incredibly safe option. As gas doesn’t have to be used for the systems, properties in a multi-residence building are protected from the risk of ignition. This is particularly important in apartments and high-rise tower blocks where many people can live in one structure, and it also means that these networks are able to run off more sustainable and renewable sources.

Residential heating is actually the largest single source of carbon emissions across the UK and accounts for 45 per cent of our energy use. With approximately only one million of the UK’s 27 million homes currently having low-carbon heating systems, in order to meet our target carbon usage in the UK, the way we heat our homes and what we install into new-build developments needs to change.

Traditional heating in the UK most often uses gas boilers within properties; however, this comes with the negative impact on the environment from using fossil fuels. These heating methods also produce nitrogen dioxide emissions, which exacerbate the impact on the environment. In order to tackle a very prevalent climate emergency, the UK government has implemented a ‘Strategic Framework for Low Carbon Heating’.

As part of the framework, gas boilers will be banned from new homes from 2025. This will predominantly reduce greenhouse gas emissions through the use of low carbon and renewable heat sources, as well as reduce the UK’s dependency on fossil fuels. However, this means that new systems will need to be implemented into homes and solutions like district heating, which are currently only really prevalent in high-rise apartment blocks, could also be applied to traditional housing developments.

A low carbon future
When the ban on gas boilers takes effect, this will leave only two potential options for domestic heating moving forward: electric boilers or district heating. With this in mind, it’s been estimated by the UK government that the district heating market could rapidly grow as a result of the ban, potentially providing up to 14 per cent of heat demand by 2030, compared to the two per cent at present.

The government’s new legislation is a really positive step forward for the environment. Creating a path for alternative opportunities such as district heating will make a significant difference when it comes to our carbon footprint. Additionally, the solution will most likely branch out further to other types of housing over the coming years. In preparation for a carbon-neutral future, as an industry we must all begin to consider alternative options such as district heating and understand the positive changes the solution can bring.

Warmafloor has developed Calefa, a state-of-the-art heating interface unit (HIU) for use in district heating systems. With a minimum saving of 200-400kWh per year, the solution greatly enhances and improves hot water delivery in terms of responsiveness, efficiency and ease of installation. Created with a unique four-option bypass control, users receive optimum efficiency and maximum functionality.