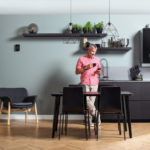 Are we now at the cusp of move away from the widely recognised approaches to heating and hot water provision? PHPD assesses the current situation and looks at what might be on the horizon.

Whilst units have evolved over time, gradually shrinking in size and becoming increasingly efficient, in the main, they have remained a functional, but largely uninspiring white box on a wall. But there are growing signs that the future might hold a different path for heating and hot water. Sharper focus was recently added to this belief with the recent Government announcment of a legally binding target to reach ‘net-zero’ carbon emissions by 2050. 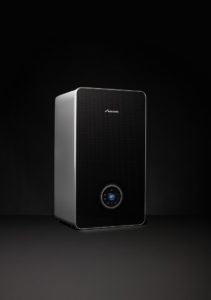 Near future
In the short time it is unlikely that the market will move too far away from what housebuilders and homeowners alike view as a familiar and understood technology. But with boilers often positioned in the kitchen – a well acknowledged key space for a new home – it may be that design-led solutions will now come to the fore. At least, this is the thinking behind the recent launch of Worcester Bosch’s new Greenstar 8000 Life and Style boilers (left).

Although also packed full of technological enhancements, and many installation and commissioning benefits likely to be welcomed by heating engineers, it is the bold design which could transform the ignored box in the corner of a kitchen into its focal point.

Top of the range is the Greenstar 8000 Style, which comes in two distinctive high gloss colour options: black and white. At the launch event for the product in April, CEO Carl Arntzen described it as a “new dawn in boiler design”.

It is available in combi, system and regular, from 30kW up to 50kW. Amongst the new features is an improved push-button LCD display through which users can access a host of advanced features including ways to actively monitor household energy use. “We have no doubt that this will transform the industry,” noted Martyn Bridges, Director of Technical Communication and Product Management at Worcester Bosch.

Heat pumps
Away from boilers, other technologies are witnessing wider uptake; most notably, heat pumps. A technology widely used across Europe, penetration into the UK is increasing and recently a number of new models have been launched.

Most now incorporate R32 refrigerant, increasing their efficiency, and with each round of product development heat pumps are also getting quieter in operation. The latest Therma V R32 Monobloc from LG has a 5 to 6db lower sound level than its previous model and comes with an Energy Rating of A+++.

At the launch of the product in December 2018 Andrew Hooper, LG’s UK & Ireland Heating Manager, said: “This new range of LG Therma V R32 Monobloc units puts us in a very good place, able to provide a high quality solution to the developers and end users in the UK looking for an energy efficient, cost efficient, eco-friendly source of heating and hot water, that is ready and able to challenge the stranglehold of the traditional boilers that we have a love affair with here in the UK.”

Heat Pumps are often combined with Underfloor Heating (UFH) systems, which not only provide a constant background heat, but also remove the need for radiators in rooms, broadening design options and increasing useable space.

Another technology to keep watching is combined heat and power. Heating systems manufacturer, Viessmann, recently announced the launch of its new Vitovalor PT2 fuel cell micro combined heat and power (mCHP) boiler which it believes can generate enough electricity to cover the basic demands of an average household, whilst saving up to 40% of household energy consumption.

Longer term
Looking farther ahead it would be worth noting the year 2025. This is when the Government’s ‘Future Homes Standard’ could take effect. Announced in this year’s Spring Statement the Chancellor, Philip Hammond, indicated that new homes would not be able to use heating systems reliant on fossil fuels from this date. Were it to come into effect, this policy could move the market towards a wider array of electric options, including direct electric heating and heat pumps.

However, it should be noted that the Standard is by no means set in stone. It must be consulted upon and may well be delayed, altered, or scrapped altogether – like the zero carbon homes policy. 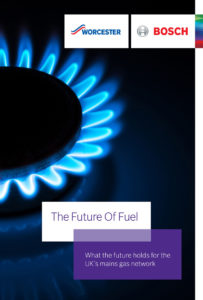 Even if the Future Homes Standard is enacted, it may not be the end of the boiler. There are a number of projects underway to assess the feasibility of incorporating higher levels of hydrogen into the gas grid, and the possibility of switching to hydrogen altogether. Worcester Bosch has had a hydrogen boiler running on test for a significant period and is exploring this opportunity, publishing a ‘Future of Fuel’ report in December 2018. To view the full report click here.

According to the report, decarbonising the supply running through the mains gas network would cost three times less than the government’s current aim of electrification. Martyn Bridges noted: “The UK’s established gas infrastructure has worked incredibly well for many years, which presents us with a massive opportunity. We can leave it untouched, replacing only the chemical make-up of matter running through it to a carbon-free alternative. As ever, however, political will is vital if we are to use hydrogen as a means to achieving our goal of carbon reduction.”

After using natural gas for decades, it is likely that the way we heat and provide hot water to our homes is beginning to change. Whilst in the shorter term boilers could become more design orientated, looking farther ahead it is likely that the market will gradually shift towards a broader array of alternative solutions.