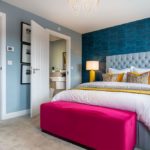 Bellway has introduced three new showhomes at its Walton Park development in Walton-on-Thames.

There’s currently a choice of two, three and four-bedroom houses available to reserve at Walton Park, with two-bedroom apartments coming later in the year. The first homes will be ready to move into this summer.

Daniel Williamson, Head of Sales for Bellway South London, said: “There’s a big demand for new homes in this area, as we’re already discovering from the number of visitors we’ve seen here. We’re getting a cross-section of people interested, because the apartments and smaller properties here have been designed to suit first-time buyers and young professionals, while the larger homes will be perfect for families looking to settle in the area.”

The 97 new homes are located on the Rivernook Farm site, off Hurst Road. The development will include five hectares of open space, including a large central green. Bellway will pay £667,000 towards local education and other community facilities as part of the planning agreement for the development. Elmbridge Borough Council gave the development the green light in November 2017.

0 0 0 0
Previous : 163 new homes confirmed for New Lubbesthorpe
Next : Developments #20 | Updates on projects across the UK