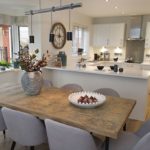 Work is set to begin at a new Bellway housing development which will bring 373 new homes to Bourne.

Plans for the development, to be named Abbey View, were approved by South Kesteven District Council earlier this year.

The site, which spans 30 acres and is located off Newton Abbot Way, is the final phase in the Elsea Park development scheme, which began 20 years ago.

Part of the Bellway development covers the site where Bridge 234 – a remnant of the old steam railway line which ran through Bourne – currently stands.

Although the bridge will be removed due to its poor structural condition, the limestone blocks marking its corners will be reclaimed for use within a new paved piazza, to preserve this piece of Bourne’s railway heritage for future generations.

Philip Standen, Managing Director of Bellway Eastern Counties, said: “With planning approval in place, we are preparing to move onto the site within the coming weeks to start construction. The development is situated in a well-connected and sustainable location, within walking distance of Bourne town centre.

“Abbey View will include a mix of two, three and four-bedroom private homes, as well as 37 one, two and three-bedroom homes designated as affordable housing for local people through rent or shared ownership.

“Aside from delivering high-quality homes, plans for the development also include play areas and landscaped open space. A designated cycle and pedestrian path will also be provided for residents to enjoy the local surroundings.”

The first homes are scheduled to be released for sale at an on-site launch next spring.