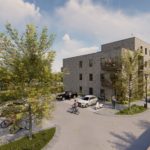 Bellway London Partnerships has had plans approved to build 35 affordable homes in Crayford.

A disused industrial site in Crayford will be transformed into a development of 35 affordable homes as part of plans by Bellway London Partnerships. The development in Maiden Lane will create new houses and apartments along the banks of the River Cray. Plans were approved for the development on 5th September by Bexley Council.

The homes will be among the first to be built by the newly established Bellway division, which was set up in February to increase the supply of low-cost homes in London.

Under the plans, a locally listed barn, most recently used as an auction house, will be carefully taken down and rebuilt using as many of the existing materials as can be preserved.

In addition, Bellway will build two coach houses, 11 houses and a block of 20 apartments. Access to the riverbank alongside the River Cray would also be re-opened for use once the development is complete.

Dan Brady, Development Director of Bellway London Partnerships, said: “Our plans will bring forward a redundant brownfield site to deliver new affordable housing for Crayford. There will be 26 homes available for shared ownership, providing opportunities for local people to take their first step on the housing ladder, and nine for affordable rent.

“Bellway London Partnerships is committed to creating high-quality housing in the private and affordable sector, and design has been at the forefront of this scheme throughout the early stages of the planning process. The artist’s impressions demonstrate how we would create an attractive development which would enhance the area while helping to meet the demand for more affordable homes.”

The development will include 23 two-bedroom homes, seven three-bedroom homes and five four-bedroom homes. Parking will be provided for 47 cars and there would be storage for 42 bicycles.

Bellway London Partnerships will commence on site later this year and deliver the new homes to their partnered housing association at the end of 2020.

0 0 0 0
Previous : Combine technology and lighting to create stunning spaces
Next : House building for veterans gets under way