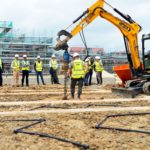 A development of 47 new homes at Priors Hall Park in Corby is the site of a new heating and hot water technology promising to be carbon positive.

An system developed by Leicestershire based thermal storage specialists Caplin Solar is supplying renewable energy to 47 new homes at Priors Hall Park in Corby, Northamptonshire. The development will be the first of its kind – and promises carbon positive properties that generate more energy than they use.

The patented Earth Energy Bank, a matrix of shallow bores that sit within the footprint of the house, is an inter-seasonal thermal storage technology that can meet a home’s full annual hot water and heating requirements using just solar energy. The system stores heat in warmer months so that it can be used during colder times of the year.

Hybrid photovoltaic-thermal (PV-T) panels collect thermal energy and generate electricity. The heated fluid from the panels is pumped through the Earth Energy Bank. In winter the stored heat is extracted using a Ground Source Heat Pump. A sophisticated controller manages the flow of energy within the integrated system determining the best energy source to meet demand.

The award-winning technology was first installed in 2013 in a highly successful demonstrator, the Solar House, and has since extended to a wide range of individual private homes throughout the UK. (PHPD featured one such home in the March 2016 issue.)

The Priors Hall Park project is the first time that this system has been applied to a commercial scale residential development.

With a record number of new homes needed to solve the housing crisis, combined with mounting pressure to reduce our carbon footprint, its proponents hope that the Earth Energy Bank could provide housing developers and local authorities a practical and affordable solution to the challenge of providing energy efficient homes.

Michael Goddard, Director of Caplin Solar, said: “We’re excited to showcase our Earth Energy Bank system at Priors Hall Park in Corby. After years of development and use on smaller projects, we’re delighted to be able to demonstrate how it can be applied on a larger scale.”

The sponsors of the Priors Hall Park project, Electric Corby CIC were awarded €750,000 by the EU Horizon 2020 CHESS SETUP research and innovation programme to evaluate the impact that a combination of PV-T, thermal storage and ground source heat pumps could make to the energy self-sufficiency of new buildings.

Cardiff University will collect data about the performance of the Earth Energy Bank system and the results will be shared as part of the CHESS SETUP project. De Montfort University, which has conducted research into the Earth Energy Bank since 2013, will also be monitoring the performance of the system at Priors Hall Park, with a view to building a mathematical model of the system to further advance the technology.