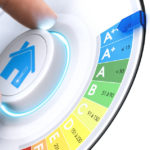 What impact could the government’s new building regulations have on energy targets?

In Autumn of 2019, the government announced they were in consultation on a long-awaited set of new building regulations. The consultation concludes later in February, and an announcement is expected in late Spring on new regulations which will likely come into force towards the end of 2020.

With no change in national building regulations or standards for the last decade – thanks to Brexit and previous governments de-prioritising sustainability – this update is welcome news indeed, and could represent significant positive changes in the future sustainability of our homes.

Option 1 would enable the government to deliver a 20% improvement on the sustainability of new homes, which the government anticipates will be achieved through better use of ‘building fabric’ elements such as window glazing and insulation, making it the lower cost option.

Option 2 – which the government state is their preferred option – would deliver a 31% improvement, which they expect to be achieved largely through renewable energy sources like solar panels and ground source heat pumps, with a strong focus on bringing in more technologies to support delivery.

However, in practice, there will be multiple ways of achieving Option 1 and Option 2, which housing developers will consider; all these ways may involve building fabric improvements and renewable technologies such as solar.

Without these new regulations, the government would have little chance of meeting their Future Homes Standard target, which comes into play in 2025 and aims to create a 70-80% improvement in the sustainability of new homes, partly by eliminating gas boilers in all new properties.

In Scotland, the renewable energy model is well established and heavily proven; under Scottish building regulations, most new homes include certain fabric elements and solar PV as standard, and if Option 2 comes into place this year, housebuilders in England will follow suit.

Traditionally, once a homebuilder has started a site and ‘struck ground’, the whole development will be based on whatever building regulations are in place at the time, but that’s set to change too, with regulations being applied to each individual plot or house as it’s developed and a much shorter transition period.

Considerations around homeowner affordability will be an important part of these regulations. Whilst we’re moving towards greater use of electrical technologies like electric heating – which is expensive to run, even if it produces minimal carbon – the government don’t want housebuilders to install expensive electric heating purely to tick the ‘low carbon’ box.

These regulations will therefore include an affordability measure to ensure that any technologies installed in new homes will generate lower energy bills for the homeowner.

Homeowner education will be vital in the adoption and outcome of these regulations. With new technologies like heat pumps being more widely adopted, householders will need to know how to operate them most efficiently (e.g. running the temperature much lower) or risk sky-high bills.

Changes to the way energy is measured will also come into play. In recent years, the government have been so successful at decarbonising the grid that carbon now only accounts for a just an eighth of every unit of electricity.

Solar power and similar renewables, which are designed to reduce the amount of electricity we use, actually offset the reduced carbon figures, so switching our main measurement mechanism to Primary Energy – which accounts for every unit of energy we need to use and produce down the stream – gives a much more realistic measurement mechanism than basing it on CO2.

Beyond the Future Homes Standard, the government are working towards a 2030 Grand Challenge of halving energy usage in new homes, and the implementation of new building regulations will play a critical role in meeting these targets and – crucially – moving us towards a cleaner, greener future.