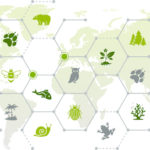 As part of the newly-introduced provisions of the Environment Act 2021, developers need to deliver a mandatory minimum 10% biodiversity net gain (BNG) – maintained for at least 30 years – on all their schemes in England to compensate for habitat losses.

To determine and evidence a site’s BNG, planning proposals should follow a four-step mitigation hierarchy: avoidance, minimisation, on-site restoration and offsetting. The preference is for mitigation measures to be provided on-site. However, where this is not possible, developers should aim to provide and secure mitigation measures in terms of local habitats.

Housebuilders are already familiar with the concept of offsetting as planning obligations have required measures to be secured for many years. However, the Act now gives these provisions statutory weight – giving certainty in terms of what is required.

Biodiversity metric
The Department for Environment, Food & Rural Affairs (Defra) and Natural England has introduced a biodiversity metric. This uses a habitat-based approach to assess an area’s value to wildlife, which will be used to demonstrate biodiversity net gains or losses and ensure new developments are “nature positive”.

There are potential challenges to be overcome in applying the metric – for instance, being able to show there has been a meaningful improvement to a habitat could be problematic, particularly if an area is inherently of good value to begin with. This could mean seeking out locations that would provide a better score in accordance with the BNG metric when formulating and proposals.

Resourcing requirements
As the metric is in its infancy, there’s a shortage of people who understand how it works and local authorities haven’t been provided with any additional resource or capacity. While there is a move to fund more ecologists at local planning level, in the meantime, sign off delays are inevitable.

To assist in speeding up the process, developers should provide as much information as they can at the beginning of their proposals. If finances allow, another option could be assisting local authorities in ring-fencing resources by undertaking the assessment work themselves, particularly on bigger schemes, and potentially also looking at resourcing an ecology officer’s time.

Early engagement
The key for developers with this new law is to ensure any proposals are brought forward with BNG in mind. Measures should be factored in and accommodated from an early stage to avoid pitfalls further down the line. Creative thinking and collaboration with other stakeholders throughout the process will bolster this further.

Engaging with local authorities during the proposals will also demonstrate that the BNG process has been thoroughly thought-out. In the broader sense and in terms of looking at it holistically, it means developers should be able to secure more meaningful BNG, which will help in terms of place-making and making sure what is being delivered has longevity for residents.

Existing housing allocations
The government is expected to publish a new levelling-up white paper later this month, which is set to include recommendations aimed at improving living standards. There are also the ongoing drives to increase the provision of affordable housing at a policy level and this may be given additional weight in due course.

While the white paper is unlikely to tinker with the Environment Act, it will be interesting to see how it interacts with the recently enacted BNG requirements in respect of the overall viability of schemes.

The reality is that there is only so much money “in the pot” when bringing sites forward, and in some areas, a 10% BNG requirement will be costly to deliver. The reality is that as affordable provision isn’t statutory and so doesn’t – at present – carry the same weight as other considerations.

Looking ahead
BNG offers developers and housebuilders an opportunity to be able to evidence more clearly how their construction work is less impactful to the environment. With the UK’s net zero target at the forefront of conversation, this new legislation puts the industry firmly on the right track.

Anna Cartledge is a Planning Partner at Shakespeare Martineau. https://www.shma.co.uk