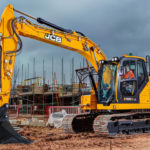 Earlier this year JCB launched its new X-series excavators in the 13-16 tonne sector. PHPD takes a closer look at the new machines that promise both enhanced operator comfort and more power and accuracy than ever before.

At the launch JCB Chief Innovation and Growth Officer Tim Burnhope said: “The machine of choice for groundworks has always been the 13-16 tonne excavator. They are quite simply the workhorse of the building site. In the UK alone this class of machine accounts for nearly 60% of all tracked excavators sold, so we are hugely excited about the introduction on three new X Series machines which cater directly for the needs of the all-important groundworks sector.”

Noise reduction
Although packed with new features one of the key improvements worth shouting about is the incredible ‘in cab’ noise reduction of up to 68%, compared to the company’s previous JS130 and JS145 excavators. On the new X series machines in cab noise is now 5dB(A) lower at 67dB(A).

The new, quieter cab is also fully-sealed and comes with a choice of comfortable Grammer seats, with heating and cooling options available. The operator also benefits from seat mounted servo levers. The controls have been designed to be 100% operator-focused, with a new command pod to the right of the seat that brings together all switches and controls in a single seat-mounted unit. A new 7” monitor with intuitive menus and functionality can be accessed through an automotive-style rotary controller.

And to get the machine into use quicker, JCB has cut the number of steps the operator needs to complete before the new machines are ready for work; in fact the operator is now up and running within two seconds of turning the key.

Heavy hitter
However, in introducing a larger – more comfortable cab, has there been any compromise elsewhere? Well, according to JCB, not one bit. It says that because there has been no increase in boom offset, there is no increase in stress on the slew bearing, ensuring super smooth slewing and pinpoint accuracy when digging a trench.

Plus, the new X Series excavators use JCB’s global boom and arm design, and the 140X and 150X have a larger bucket cylinder to deliver an 11% increase in bucket tearout force. The power boost duration has also been increased from three to nine seconds, giving maximum bucket and dipper tearout for longer. To match these improvements, the hydraulic oil cooler size has been increased by 15% for superior cooling performance.

The 140X and 150X also come with a larger Kawasaki hydraulic pump that can run at lower engine rpm. JCB has calculated that this means six per cent more material is moved, for every litre of fuel used.

With a more comfortable cab, greater power and enhanced accuracy it is highly likely that JCB’s new X series excavators will become an increasingly common sight on building sites across the UK in the coming years.