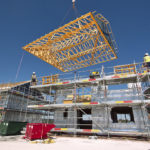 Alex Goodfellow, chair of the Confederation of Timber Industries, looks at the importance of, and drivers behind the switch to lower carbon materials such as timber for housebuilding, the role of offsite timber frame and what this change means for housebuilders.

There is now no doubt that action must be taken to reduce carbon emissions from human activity. In August this year, the Intergovernmental Panel on Climate Change (IPCC) issued a stark warning that unless ‘immediate, rapid and large-scale reductions in greenhouse gas emissions’ are achieved it may not be possible to limit global temperature rises to the critical 1.5°C to 2°C range.

With an update to the Climate Change Act in 2019, the UK Government made a commitment to achieve net zero by 2050. This will require large-scale changes in every sector, including the building materials and techniques used for new housing.

One relatively simple change, and one that is advocated by the Government’s Industrial Decarbonisation Strategy, is to replace higher carbon materials such as concrete, brick and steel with low carbon materials such as timber as trees absorb and store CO2 as they grow. The Climate Change Committee (CCC) estimates that using timber frame to build 270,000 homes per year would mean three million metric tonnes of CO2e could be absorbed and stored – the equivalent of removing 648,131 cars from the roads. 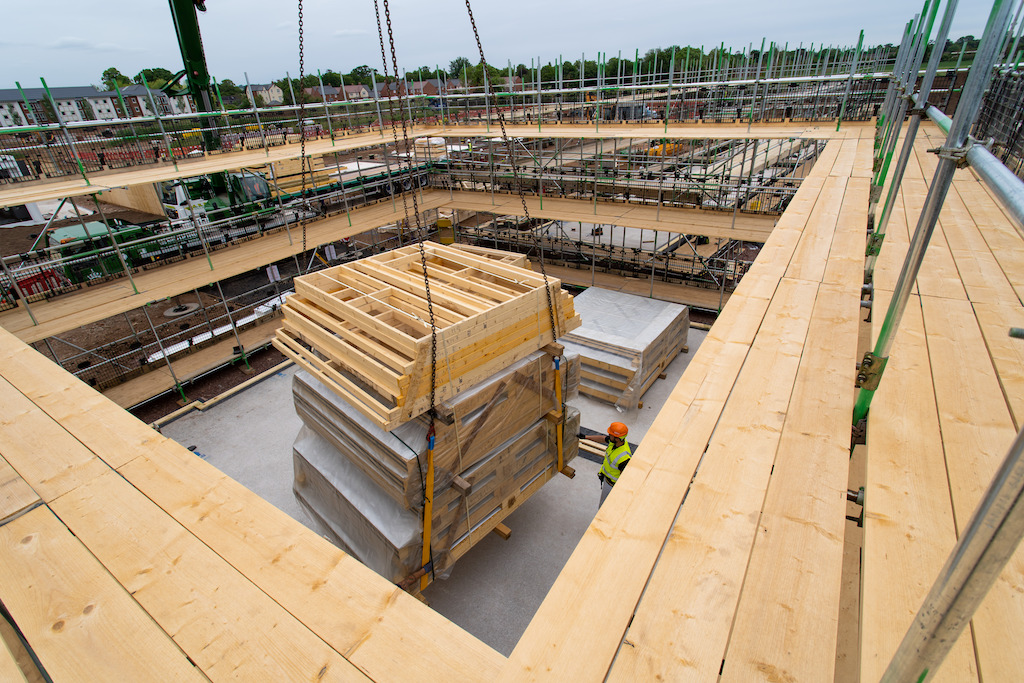 What does this mean for housebuilders?
Some of the UK’s biggest housebuilders already build a sizeable proportion of their homes in timber frame and have pledged to increase that proportion significantly over the next five years. Another significant introduction is the Homes England requirement for 25% of homes built through its Affordable Homes Programme to be delivered using modern methods of construction (MMC).

In some areas of the UK, timber frame is already the go-to method for new homes. For example, in Scotland the majority of homes are timber frame, while in England it represents only a small proportion.

Besides the environmental drivers, there are clear practical advantages for housebuilders. These benefits were outlined in a recent report from the All-Party Parliamentary Group (APPG) for the Timber Industries, which explained how the increased use of timber and MMC could contribute to relieving the housing crisis.

Accelerate construction
Firstly, off-site manufactured timber frame systems have the potential to accelerate construction by delivering new homes 30% quicker with less waste generated. An off-site manufactured timber frame house can be weather tight in just a matter of days while for a fully brick built house this can take weeks. This not only minimises the risk of weather delays but also provides the opportunity to begin work on the interior areas while the exterior is being completed, shortening the overall build time.

The controlled factory environment also allows a higher level of quality control to ensure fewer defects and eliminates certain health and safety risks associated with on-site construction. The more of the build that is completed off-site, the greater these benefits become.

In addition, one of the key issues for many housebuilders is the lack of both skilled and unskilled workers, with construction job vacancies reaching 43,000 between July and September 2021 – the highest level in 20 years. This means that utilising off-site production can have tangible benefits as the property can be built with fewer people, or the same size team can build more homes faster.

For example, the serious shortage of bricklayers, among many other skilled trades, is an issue that is familiar to everyone in the sector. Using timber frame for the structural walls instead of concrete blocks essentially halves the amount of work a bricklayer needs to complete on each property, allowing them to progress to the next one quicker.

Despite these advantages and the shift that is already taking place in the market, there are some businesses that still see timber frame as a more expensive approach. However, this is a misconception as STA data suggests that off-site timber frame is in practice 2-3% cheaper than masonry build.

Existing capacity
In addition, the Structural Timber Association (STA) estimates that there is existing capacity within the established and thriving UK timber frame manufacturing sector to double the annual output and reach, or even exceed, 100,000 timber frame houses per year. This means it is possible for housebuilders to partner with a specialist timber frame manufacturer, many of which are already expanding their capacity, to deliver the required homes.

Taking action to reduce the carbon emissions associated with construction is an essential part of meeting the UK’s net zero target. However, increasing the use of timber and MMC not only helps housebuilders achieve their own sustainability goals but can also provide the answer to many of the issues facing the sector.