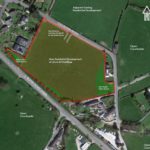 Five months after successfully purchasing a plot of land in Denbigh, Macbryde Homes confirmed that its plans to bring 64 new homes to the town had been given the green light by Denbighshire County Council. Work on-site will start as soon as possible.

Located between the Old and New Ruthin roads, the 5.2-acre site will become known as ‘Cae Felin’ and be comprised of a mix of two-, three- and four-bedroom homes with prices starting from £154,995. The site boasts stunning views over the Vale of Clwyd.

With the site favourably located and Denbigh itself offering a wealth of vital amenities including doctors, dentists, shops and several primary and secondary schools, these homes are expected to appeal to first time buyers, growing families and young professionals. Gwyn Jones, Managing Director at Macbryde, comments:

“The housing need across the region is well documented and as a locally-based firm, we are all too aware of this. To, therefore, get the green light on these new homes is great news and we’re anticipating strong local interest when we start on site.

“Denbigh itself has a wealth of vital amenities which are well placed to support both the existing and future local population and we’ve additionally ensured that as part of our plans, provision is made for public recreational space. A scheme of landscaping and tree planting will also be integral to the site.”

With work anticipated to start as soon as possible, sales will launch later this Spring.