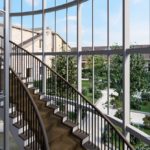 Fifty Two Group to redevelop The Coach House in Gosforth

Developer, Fifty Two Group, has unveiled the details of its latest development in Gosforth where it is converting The Coach House at the Drive, into luxury apartments and houses.

The plans for the conversion were given the green light by council chiefs last year, and now the people behind the scheme, Coach House owners, McDougall Dodds Limited, in conjunction with the FiftyTwo Group, have revealed their plans on how the development will look.

Eight properties will be created, which include two houses, two bungalows, three two- bedroom apartments and one three-bedroom apartment. Pictured above is The Coach House staircase, which overlooks the courtyard.

Work will begin on converting the Grade II listed building in June, with a projected completion date of spring 2020.

Daniel Gibson, of the FiftyTwo Group, said the homes were perfect for people who might be considering downsizing but don’t want to move out of the area. “This part of Gosforth is widely acknowledged as one of the most prestigious addresses in the region,” said Daniel.

“And there are people who have lived here for most of their lives who might want to downsize, but without compromising on the quality of their home. The Coach House is a development that will tick all of those boxes – a variety of beautiful homes in a fantastic location.”

The FiftyTwo Group is known for developments in historic properties, having previously transformed 52 Old Elvet in Durham into 12 luxury apartments. It was that development which led to the partnership with the Summers family, who own McDougall Dodds Ltd, which has owned The Coach House since the 1970s.

The Coach House, together with the Gatehouse which is also located at the Drive, are the last remaining parts of Coxlodge Hall, a mansion built in Gosforth by Job Bulman in 1796 which occupied a site of more than 30 acres.

Since the 1950s the building has been used as commercial offices until last year when the current development was confirmed.

0 0 0 0
Previous : New drone footage reveals progress at Brio Landale Court
Next : How to protect a heating system in a new home