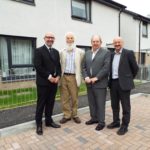 The project, which was designed by local firm Bracewell Stirling Architects and built by Alloa-based Marshall Construction, is the first project to be completed as part of the collaborative agreement.

The two associations have a Strategic Collaborative Working Agreement, whereby Fife-based Kingdom acts as the development partner and transfers the completed homes to Ochil View who own, manage and maintain the finished houses.

The 11 new social rented homes in Sauchie were completed at the end of May. All the homes have been fitted with PV panels and designed to achieve the Scottish Government Greener Standard of Sustainability. The project cost £1.8 million with over 50% of the funding being provided in subsidy from the Scottish Government.

Tom Brown, Ochil View’s chairperson, said: “This is our first partnership project with Kingdom and we have been very pleased to pool resources with them. This project has been a great success and I would commend Kingdom’s approach and their development skills. The properties are of a very high standard and initial feedback has confirmed that our tenants are delighted with their new homes.”

Kingdom will also be starting on site this year with two further projects which will transfer, on completion, to Ochil View. It has plans to deliver over 200 new homes in Clackmannanshire over the next three years.

0 0 0 0
Previous : Use concrete to create kerb appeal
Next : Waterfront Plaza in Leith set to launch