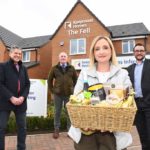 A North East regeneration specialist, established 20 years ago to transform communities and economies in the Durham coalfields, has handed over the keys for its 2,000th property.

She said: “It was quite a surprise to find out I am moving into the 2,000th home.  I chose the site because of its location, affordability and the quality of the homes.”

For over 20 years, DVRC and its predecessor – Durham Housing Partnership – has been investing in former coalfields villages to create new homes, stimulate economic activity and encourage communities to flourish.

There have also been developments at Byland Lodge and Newton Hall in Durham City, Newton Aycliffe, Peterlee, Seaham and Spennymoor.

Across these sites a total of 2,059 homes will be built, of which just over a quarter – 516 – are for affordable rent.  With an average price of around £110,000, DVRC has consistently delivered homes for sale that are within the reach of local, young people.  Over 80% of properties sold have been bought by those living within 10 miles of the development and around 60% were first time buyers.

This £240 million investment includes around £150 million spent with local businesses and throughout the work, close relationships with Durham and Derwentside Colleges have ensured that, over the past 20 years, there have been between two and six apprentices employed on the sites at any one time.

In addition, over £25 million has been invested in Freeman’s Quay swimming pool and leisure centre in Durham City, a new bowling green and community centre at Newton Hall, an 18,000sq ft community building at Ushaw Moor, access improvements to a  school in Peterlee and a string of community initiatives such as arts projects, shop renovations, resurfacing of unadopted roads and a £100,000 Community Chest.

To commemorate the 2,000th resident, DVRC will present the Shotton family an annual pass to Beamish museum – which stands as a strong reminder of Durham’s coalfield history and heritage.

Ian Prescott, Land and Partnerships Director at Keepmoat Homes said: “The DVRC initiative was formed to help revitalise former coal mining villages and communities across Durham. This has been achieved through major investment creating jobs and training opportunities for local people.

“The homes for sale have been targeted at first time buyers, helping to keep young people in the former coal mining settlements and preventing the loss of economically active people from the areas that were at risk of decline. The affordable homes created have helped those in housing need.  Now, with 2,000 dwellings and after a £240 million investment, it is clear that the partnership between the council and Keepmoat has had a major impact in this respect across the county.”

Cllr Carl Marshall, Durham County Council’s Cabinet Member for economic regeneration and chairman of DVRC, said: “Ensuring people have access to high quality affordable housing is a key priority for the council and it’s fantastic to see DVRC making such a positive contribution towards this aim.

“We want young people to be able to buy homes in the communities where they grew up or close to where they work, and to help first time buyers take that exciting first step onto the property ladder. Over the last twenty years, DVRC has helped 2,000 families and individuals to do just that, while also giving back to the community through apprenticeship and training programmes and investing in amenities, leisure facilities and enriching activities.

“It has also supported the local construction industry and supply chain, boosting the economy and creating and safeguarding jobs.  I would like to congratulate Kate and her family on the purchase on their new home and with them the best of luck for the future.”