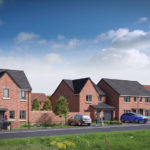 Keepmoat Homes completes purchase of land from Rolls-Royce in Derby

Keepmoat Homes has completed the purchase of a former factory site which built the iconic Spitfire aircraft used during the Second World War, from British heritage brand and automotive manufacturer, Rolls-Royce.

Permission was granted by Derby City Council in June of 2020 for the housebuilder to deliver 372 one-and two-bedroom apartments and two-, three- and four-bedroom homes that makes up part of the Council’s wider Osmaston Regeneration Area project and aims to reinvigorate the vacant land that was formerly occupied by Rolls-Royce for 100 years.

“Keepmoat Homes is honoured to continue the legacy of this historic piece of land that played a vital role in Europe’s victory over 70 years ago, and we’re working hard to ensure that this history is remembered for generations to come.”

The aptly named Marble Square development, which was inspired by suggestions from pupils of the local school, Ashwood Spencer Academy, will encompass the previously converted and historic Marble Hall which now houses office and commercial space.

Councillor Steve Hassall, Cabinet Member for Regeneration said: “This is an exciting milestone in developing a site that has been vacant for around 15 years. The Council has been working in partnership with Keepmoat Homes and the local community for a number of years to bring regeneration of this site to fruition, and we’re delighted to see the transfer of land to enable the next stage of work.”

Work on the site began last year, after remediation works have been completed, with the first homes due to be available for purchase this August. The completion of Marble Square is due in 2028/29.