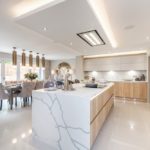 Designs have now been released by Duchy Homes as construction gets underway in the Cheshire village of Winterley.

Situated on Hassall Road, Duchy Homes is building an exclusive collection of 29 new homes, a combination of four-bedroom and five-bedroom detached homes with two-bedroom and three-bedroom affordable houses and bungalows.

With sales launching soon, the housebuilder has recently released visuals of the development, named Nursery Fields, and has announced buyers will be able to choose from six designs. The new homes will feature Tudor-style beams and gable detailing, stone sills and decorative chimney stacks, while each home blends country charm with modern living styles.

The development’s location benefits from a picturesque village setting close to the charismatic market town of Sandbach. Duchy Homes has begun work on foundations at Nursery Fields ahead of its anticipated sales launch in September.