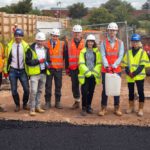 The carbon footprint of a new development in Bristol is being reduced with help from a new asphalt made, in part, from recycled plastic bags.

Residents at Bristol City Council’s Ashton Rise development will drive on new ‘green’ roads when they move in next year. Willmott Dixon has used a new asphalt that incorporates non-recyclable plastic originating from the scheme into the asphalt used on Ashton Rise’s new roads.

By replacing part of the traditional carbon intensive bitumen usually found in asphalt with waste that would otherwise have gone to incineration or landfill, the innovation will stop the equivalent of around 150,000 single use plastic bags from being incinerated or going into landfill.

It has been calculated that it will also save 1.6 tonnes of carbon entering the atmosphere. Additionally, because it contains plastic, the asphalt will be more flexible, allowing it to cope better with movement caused by changes in the weather, reducing cracks and potholes.

To deliver this scheme, waste management company ETM collects any non-recyclable plastic from the Ashton Rise site before plastic road company MacRebur processes it so that the resulting asphalt can be laid back at the development by Gworks Surfacing. Also, as the plastic melts into the mix, there are no microplastics present.

Neal Stephens, Managing Director for Willmott Dixon in the South West, said: “This innovation is also complemented by low-carbon heating which is also being installed at the site, making Ashton Rise a highly sustainable development with individual homes making lifetime carbon savings of 23.5kg.

He continued: “By showcasing these innovative solutions to support carbon waste reduction, we hope to inspire other developers.”

Toby McCartney from MacRebur said: ‘‘Sustainability is a key part of the Ashton Rise development so it’s fantastic to see our technology being used here to repurpose plastic which would otherwise have gone to incineration or landfill for the roads and footpaths across the site.’’