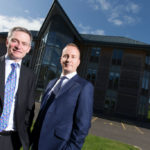 A marked improvement in margins at the Aberdeenshire housebuilder and construction group led to an increase in operating profit from £10.3milion in 2019 to £13.2million. This is despite turnover dropping from £92million to £85million as a direct result of the inability to trade during the final weeks of the financial year due to the COVID-imposed lockdown.

Since coming out of lockdown in the summer of 2020, Bancon Group has reported a strong recovery and trading performance and now has a positive forward sales position across its homes, timberframe and construction businesses.

Notwithstanding the on-going market challenges in the North-east of Scotland, Bancon Homes has continued to deliver its ambitious growth plans. Three new developments were launched in the period, with further sites secured since its year end, including its first site in the Central belt as part of its expansion outwith its traditional North-east market.

Deeside Timberframe delivered a record year after capitalising on the increasing demand for off-site construction methods by growing  repeat business with existing customers.

Trading performance and margins were ahead of expectations at Bancon Construction. This is attributed to the clear strategy of  focusing on higher margin work and extending its reach throughout Scotland.

Exceptional costs of £3million, incurred in the period, have suppressed the group’s overall position of improved margins and trading performance, resulting in a loss before tax of £0.5million in the annual accounts. These were due to a non-cash impairment to write down the value of a long-held development and a one-off loss on a historic construction contract.

John Irvine, chief executive of Bancon Group, said: “These robust results in a financial year, which was impacted by the pandemic and the subdued market in the North-east at the time, reflect the overall health of the group.

“With significantly improved margins and trading performance across all three of our businesses, coupled with a very encouraging future order book, we have firm foundations from which to build sustainable, profitable growth once the impact of the pandemic is behind us.”

This confidence is shared by Santander who have signed a three-year extension to the group’s banking facility.

Mr Irvine added: “Three months of not being able to trade during lockdown and the subsequent reduced levels of activity as restrictions eased in 2020 will inevitably impact on our current financial year. But, thanks to actions taken and the support of our employees, we have emerged strongly and 2021/22 will see continued strong operating profits and a return to profit before tax. The longer-term outlook for Bancon Group is very promising indeed.”

Bancon Group, head-quartered in Banchory, Aberdeenshire operates in North-east and Central Scotland and employs over 260 people.