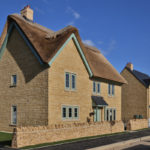 A new national survey has revealed the most popular reasons why British people are choosing to move to rural locations.

‘Peace and quiet’ is the most common reason for choosing villages over life in urban locations, according to new research commissioned by national housebuilder Mactaggart & Mickel in August.

Scotland was the only region of mainland Britain where ‘cleaner air’ was the most popular perceived aspect of village life, with 48% of respondents choosing it as a factor in decisions.

Overall, the heritage & history (21%) and character & identity (31%) were the least popular named aspects of villages in the UK that would encourage Brits to live there, according to the survey.

Mactaggart & Mickel have been building homes in rural Scottish locations since 1925, launching their first English development, St Jude’s Meadow, in the Cotswold village of Milton-under-Wychwood (pictured) earlier this year.

Joanne Casey, Managing Director for Mactaggart & Mickel’s Homes England division, said: “With so many health & wellbeing benefits on offer from rural living, it’s perhaps unsurprising that reduced traffic noise, cleaner air and better access to nature have emerged as the most popular perceived aspects of village life in the UK.

“That’s why we believe it’s vitally important for housebuilders to always build sympathetically in rural locations and carefully consider any implications for the local area within their plans. Whether it’s through using local materials or employing local specialist trades like roof thatching, we’re committed to delivering homes with a positive impact on their village surroundings.”