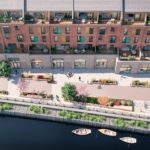 A desire to live in the heart of a community has led to a surge of interest in a unique Newcastle housing development.

Steenberg’s Yard at the Lower Ouseburn Valley is on course to be completed in summer 2021, as building work has continued despite the problems caused by COVID-19.

And those involved with the scheme have seen a huge amount of interest from people wanting the convenience of living close to the city centre, in a place which has the benefits of urban greenery and waterside living. 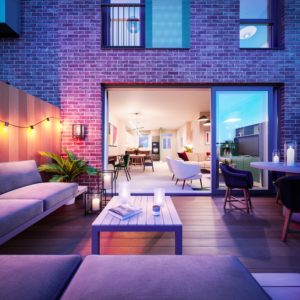 The new development, right in the heart of an area which has frequently been recognised as one of the top places to live and visit in the UK, is creating contemporary living spaces which also give a nod the history of Steenberg’s Yard.

The fact that they are also in a part of Newcastle known for its great sense of community and proximity to the river, along with being close to cafes, restaurants, an artisan bakery, unique workspaces and cultural venues makes it a highly desirable place to buy a home.

Jan Dale, director of executive estate agents, Urban Base, which is selling the properties on the development said there had been a huge amount of enquiries since day one – and that has continued to grow in the last few months.

Steenberg’s Yard is being developed by PfP Igloo – which was also behind the multi-award winning Malings development – and when completed will offer 28 duplex two and three bedroomed homes, all with outdoor terraces.

“With the situation caused by coronavirus we have seen that people are looking for alternatives to city centre living,” said Jan.

“And the appeal of Steenberg’s Yard is that it’s not only unique and exceptional but it’s right in the heart of the Ouseburn Valley which is such a fantastic place to be.

“It’s a community in its own right and I think that has become very important to people given what everyone has been through in the last few months.

“People want to stay close to home and these properties are so close to so many great local businesses, have fantastic views over the river and offer a really chilled lifestyle, which is now more important than ever.”

People who have registered their interest in the properties are now being offered a socially distanced meeting to secure their home.

There is still an opportunity to register by going to www.steenbergsyard.com

Steenberg’s Yard has been designed to make the most of natural light and space and has drawn its inspiration from local historic warehouses in the conservation area.

Its Scandinavian styling also links back to the site’s history, with its namesake, Mr Richard Steenberg, moving to Newcastle from Denmark in the 1850’s with the Jutland Steamship Company which imported timber from Scandinavia and exported grindstones to Denmark. 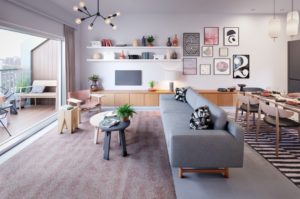 Steenberg started a warehousing business using the buildings on the site – which then became known as Lower Steenberg’s Yard.

Chris Barnard, Chief Officer of the Ouseburn Trust, understands completely why there is so much interest by people wanting to make the area their home.

“One of the Trust’s guiding principles in what we value about new schemes is that they contribute to the mixed use nature of the Valley,” he said.

“It is composed of residential dwellings, workspaces, and leisure venues and public realm and we wish to maintain such a mix going forward. Steenberg’s Yard contains a mix of residential and commercial workspace and permeability for other Valley users which ensures that mix is retained within the Valley.

“This in turn should also contribute to what makes Ouseburn a great place to live as well as work and play. We also look for schemes which are designed for the place rather than something which could be anywhere, and PfP Igloo have worked closely with the Trust and this community to capture and respond to views on the proposal.”

Steenberg’s Yard was previously a cattle sanatorium which was demolished in 2005 and the site has been empty until work started on the new properties.