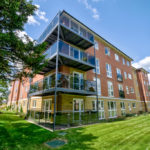 With many people living longer, there is a strong demand for new homes for what is increasing called ‘later living’. PHPD takes a look at a new report that outlines some of the potential benefits of retirement accommodation.

Homes for Later Living is a new consortium of housing providers who specialise in homes designed for older people. Its supporters include Churchill Retirement Living, McCarthy & Stone, PegasusLife Group, and the Home Builders Federation (HBF).

The group has recently commissioned a new report, ‘Healthy & Happier’ which calls for 30,000 additional homes for later living every year to boost mental and physical health of older people.

Shortage of appropriate homes
The report highlights a severe shortage of housing being built specifically for the growing numbers of retirees. The result, the report found, is that many older people are often living alone in mainstream housing that is unsafe, unsuitable and unhealthy, and this is where they are most likely to suffer from falls, social isolation and dementia.

It notes that people living in specialist retirement homes typically experience reduced health risks, contributing to fiscal savings to the NHS and social care services of around £3,500 per person per year. The report goes on to indicate that building 30,000 more retirement dwellings every year for the next 10 years could generate fiscal savings across the NHS and social services worth £2.1bn per year.

Mental health link
The research also revealed a link between good quality housing and physical and mental health outcomes for older people. Using an established national well-being criteria for happiness and life satisfaction, the report found that an average person aged 80 feels as good as someone aged 10 years younger after moving from mainstream housing to housing specially designed for later living.

In a Foreward to the report, Rachael Maskell MP, Chair of the All Party Parliamentary Group for Ageing and Older People, said: “As people in the UK get older, there is currently a severe shortage of housing being built specifically for those in later life. The result is that many older people are often living alone in substandard accommodation, where they are more likely to suffer from falls, loneliness and dementia.

“This is why we urgently need more specialist retirement housing. Building more homes across all tenures for later living every year would give people more choice and flexibility on how they live their lives.”

You can download a copy of the ‘Healthier and Happier’ report by clicking here.