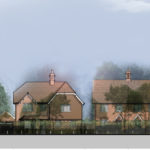 Hayfield has entered the Buckinghamshire new homes market, by securing an 8-acre development site in the historic small town of Woburn Sands.

The prestigious site was purchased with full detailed planning in place for 53 luxury four and five-bedroom houses. The development design is influenced by the Arts and Crafts era, taking design cues from some of the larger houses in the sought-after town. 16 of the 53 plots have been designated for affordable housing.

Located off Newport Road, the development area is surrounded by mature trees, which has inspired its Hayfield Oaks name. The homes have been designed around a central public open space feature, while a large balancing pond is also incorporated into the scheme. The house designs will be constructed in red brick, with render features and part-tiled hanging elevations. Construction work will commence next month – March.

Mark Booth, Managing Director of Hayfield said: “We are thrilled to have secured this development site, which will be our most prestigious scheme, by nature of the prices commanded by luxury housing in this sought-after small town. Having acquired the site will full planning in place, we will be able to commence construction next month and look forward to launching this £28m development as Hayfield Oaks later this year.

“Having recently secured an £85m equity and debt facility, we are continuing to activity seek prime land opportunities of this scale.”

Woburn Sands railway station is within walking distance of the development, which is three short stops away from the mainline station of Bletchley. Hayfield Oaks is accessed off the A5130 Newport Road, which leads directly to all the amenities for the small town, including shops, pubs, restaurants, schools, garden centres and the outstanding Ouzel Valley Park. Woburn Sands lies six miles south-east of Milton Keynes.

Ben Adams, Land Director for Hayfield said: “We have been searching for a site that would enable us to deliver a stylish development of note within easy reach of Milton Keynes. Woburn Sands ticks all the boxes for us, with the bonus being the train station that is only a short walk from the site. We are excited about getting to work on site and gearing up to the public launch, where we will be able to showcase the seven executive home designs that will be available.”

Hayfield’s live sites include the flagship Hayfields site in Southmoor, Oxfordshire, which comprises 74 luxury homes. Also under construction in Oxfordshire is Hayfield Green, where 66 luxury houses and bungalows are being developed on a 21-acre disused RAF WWII Airfield in this historic village of Stanton Harcourt. In the small market town of Southam in Warwickshire, the final phase of Hayfield Grange has just been released. The popular development comprises 51 family houses and bungalows.

In Bedfordshire, Hayfield is under construction with 105 luxury homes close to English Heritage’s Grade I listed Wrest Park Estate, which is in the sought-after village of Silsoe. Seven miles away, in the village of Clifton, the Hayfield Gate development is preparing to be launched, which comprises 95 luxury homes.

In Wiltshire, Hayfield has recently acquired a 16-acre development site in the village of Blunsdon to deliver a £29m residential scheme. While in the Cambridgeshire village of Great Gransden, a 4.4-acre site has also been acquired to deliver 40 new homes.