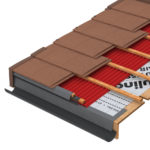 Onduline, a specialist in light weight roofing systems and water-proofing has announced the launch of a new under roof system, ISOLINE LOW LINE – which has been BRE tested and BBA Accredited to as low as 10 degrees.

With a corrugation height of 24mm, the solution is fixed below the primary tile or slate roof covering, acting as the primary waterproofing layer of a roof. Thus, making roof tiles a secondary line of defence enabling the pitch of the roof to be much lower than the minimum as recommended by the tile manufacturer.

Ardit Strica, Technical Manager for Onduline Building Products, said: “We’re delighted to be launching ISOLINE LOW LINE, it’s exciting as it is the only under roofing system in the UK that can be used on a pitch as low as 10 degrees, which is huge for the construction industry.

“Maximising ease of use for the installer was also a key priority for us with the design of this system, with the smaller corrugations of the sheet not only adding rigidity and strength, they also allow for easier fixing and greater compatibility with mechanical fixings for solar panels, which will be key over the coming years.”