For developers and specifiers, it can be difficult and costly to keep up with high-end AV demands. However, electrical solutions provider Hamilton Litestat has developed a new wireless audio range that offers excellent quality audio in an easy to install and cost-conscious package.

Long gone are the days of the boombox and the Sony Walkman. As technology simplifies and people become accustomed to more connected lives, streaming music has become the norm. Spotify and Apple Music, two of the largest music streaming services, have over 150 million subscribers combined. Many people enjoy this music on the go, in their cars and on their commutes, but listening in the home offers the opportunity to enjoy a higher quality audio experience.

Hamilton Litestat has launched a new range of wireless home audio products that are simple to install and configure, while delivering the high-quality audio that matches today’s tech-savvy consumer demand.

“We’re acutely aware that any developments – whether new build or refurbishments of existing properties – need to be highly attractive to today’s buyers and meet their lifestyle expectations, but also provide an appropriate return on investment for developers. Home audio is an area that delivers a high perceived value for buyers while being relatively low cost to install,” explains Gavin Williams, sales & marketing director at Hamilton Litestat. “We’ve developed a range that’s easy to install and set-up plus very simple to use via a specially-designed app.”

Today, one of the most popular home layouts is the kitchen-dining-living room. This creates a large open plan space with plenty of light, but also allows the whole family to socialise, interact and be together while getting on with their own activities, such as cooking, eating, doing homework, or watching TV. For many, it’s important that this area can also transform into an entertainment space. Well placed, good quality audio can help with this, and Hamilton’s solution is suited to both large open plan spaces, as well as other smaller yet high usage areas.

Four products make up Hamilton’s new wireless audio range, two of which are the WSA50 Wireless Streaming Amplifier and the H600-80W8 Ceiling Speakers. Using the robust Wi-Fi network, the WSA50 Wireless Streaming Amplifier can stream audio to virtually every room in a property, streaming to several speakers to play the same song simultaneously throughout the home. Or, with additional amplifiers, speakers can be grouped together to create sound zones, so that different audio can be played in each of these areas of the home. By utilising Wi-Fi, increased audio fidelity is achieved compared to Bluetooth, preserving more of what the artist intended and suiting the keenest ear. The amplifier also has a USB port to connect to audio stored on a NAS, USB flash drives and hard disks, and also has built-in Bluetooth should a Wi-Fi connection not be available.

The perfect companion to the WSA50 Wireless Streaming Amplifier is the Hamilton H600-80W8 Ceiling Speakers. This pairing delivers a high quality and reliable fixed audio option. The passive mono speakers, which are supplied in white with a magnetic front grill, contain a six-inch Kevlar cone and one-inch Titanium cone, delivering 80 watts of power and better-quality audio than speakers with built-in amplifiers. Two speakers are required for stereo sound: one for the right channel, one for the left.

If you wish to retrofit the Hamilton amplifier into a property or commercial premises, the amp can be paired with both Hamilton and other branded speakers.

“Being able to move in, connect a smart phone and blast out favourite tunes while unpacking boxes is of significant value for prospective buyers. It makes the home instantly theirs,” adds Williams. “There is no fuss, effort or cost for the homeowner, which is extremely appealing. And it’s not just in the kitchen-diner space where wireless audio adds value; it can be fitted throughout key areas of the home, such as the lounge or bathroom, and all be linked and controlled via the Hamilton Player App for ease of use.”

Hamilton has developed an intuitive app that allows for easy set-up and control of the wireless audio solutions across iOS or Android devices from anywhere in the home. As well as playing music stored on the device, the app integrates with a range of audio platforms, such as Spotify, Apple Music, Amazon Music and Tidal, allowing the user to play music through their preferred streaming service at the swipe of a finger. The Hamilton Player App also offers an easy-to-use EQ function that allows for the bass and treble to be adjusted to suit the listener’s individual taste and preferences.

No programming knowledge is necessary to set up and configure the speakers. They can be grouped together or played singularly throughout the home for the utmost flexibility. It means an installer can set up the most common preferences, but if a homeowner wishes to change them then they have the flexibility to do this themselves rather than face the costly call-out of an installer.

Whether the project is a new-build property or a redevelopment, installation is simple. The Hamilton WSA50 Amplifier can be installed in a ceiling or mounted on a wall or flat surface. It is recommended that the amp is placed in an easily accessible place, such as near the consumer unit, so that local storage devices can be connected. Professional installers are required to fit a fire hood to enclose ceiling speakers, which maintains the integrity of the ceiling and provides soundproofing for the rooms above. Easy step-by-step set-up instructions for installers can be found on the Hamilton Litestat YouTube Channel, or Hamilton also offers a technical support service to answer questions about individual projects. 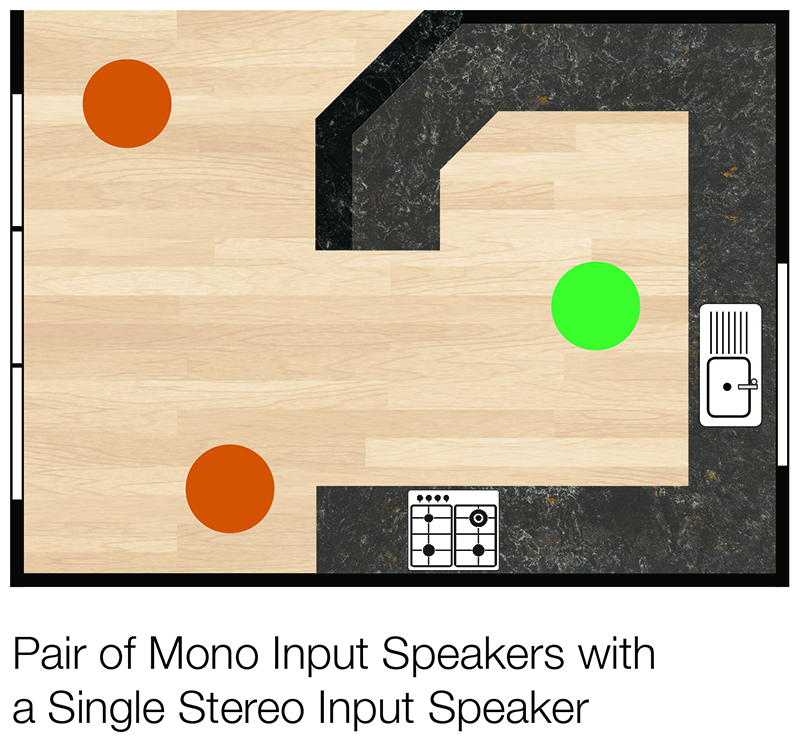 Positioning speakers to create the best possible audio is not as difficult as it might first seem.

Keep speakers around 60cm away from corners and other hard surfaces, such as tall cabinets as these may reflect or hinder the sound

For rectangular rooms of less than 30m2, two speakers placed in near opposite corners to create good sound coverage are ideal.

For rooms larger than 30m2 or L-shaped rooms, consider creating separate stereo audio zones using pairs of mono speakers in line with the room usage, with the addition of a single stereo input speaker within any enclosed space.

For long narrow rooms consider using two stereo input speakers at either end, at least. 60cm in from the room ends.

Ceiling speakers are an excellent solution for open plan kitchen diners and entertainment spaces, providing stereo sound throughout the space.

Be aware of ceiling speaker placement above any surfaces that could disrupt the audio. For example, it’s unadvisable to position a ceiling speaker directly over a kitchen surface because the sound will reflect off the worktop and could interfere with conversation.

For a small space such as a kitchenette or utility room, single stereo ceiling speakers are an excellent solution. A single stereo input speaker plays both channels through one woofer and two tweeters. Depending on the size of the room, installing more than one speaker might be preferable: place one above the sink and one in the opposite corner to ensure good audio coverage. These speakers also work in large awkwardly shaped rooms to supplement the main stereo speaker pairing.

Supporting the fixed audio equipment and completing Hamilton’s new wireless audio offering are two products that improve audio flexibility within the home. One is Hamilton’s Appio Wireless Active Wi-Fi Speaker, which has a built-in amplifier, delivers 20 watts of power, and offers an EQ function to tailor the treble and bass output to the listener’s preference. It supports multi-room playback by linking multiple speakers together through the Wi-Fi, with playback having a minimal delay of less than five milliseconds. One Spotify account can stream to multiple Appio speakers simultaneously.

The Appio wireless speakers can supplement the set-up in an open plan area, creating a very pleasant and pervasive sound field that enhances the ambience. Placed just above seated ear level, multiple Appio speakers should be positioned in opposite corners of the room, equidistant from the central listening space to work together.

Meanwhile, the Oyster Wireless Audio Wi-Fi Receiver turns an existing home hi-fi into a wireless music receiver. Streaming from smart devices is made possible, while six available pre-sets allows quick and easy access to radio stations, user playlists, albums and tracks. Moreover, if a Wi-Fi network isn’t available, the Oyster can create its own hotspot for a mobile device connection.

Both the Appio speaker and Oyster Wireless Receiver can be controlled by up to six separate connected devices at the same time, supporting MP3, WMA, AAC (ACC+), Apple, Lossless, FLAC, and APE formats.

“Both the Appio and Oyster provide further value for buyers, whether the home is new or a renovation,” says Williams. “They are not required to support the fixed audio solution, but by incorporating them into the system they can allow the integration of existing audio equipment, help create a more pervasive sound, and also provide the flexibility to take audio into rooms that don’t feature fixed audio.

“Incorporating Appio speakers, perhaps as part of a housewarming package, gives real wow factor and a much higher perceived value than the cost of the equipment and installation. The Hamilton Player App allows them to all be grouped together and easily controlled, delivering that technological luxury that many prospective buyers are seeking.”