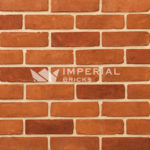 Imperial Bricks has launched a new ‘Regency’ range, which it says is available now on short lead times.

“The Regency range is made to our specification by a partner factory in Europe,” commented Imperial’s Managing Director, Jason Hughes. “In view of the current brick shortages and in line with demand, we asked our factory to produce in excess of six million bricks in imperial and metric sizes, available on short lead times. We also have large quantities in stock here in the UK. The new bricks have proved very popular already with merchants and their developer/self-build customers.”

“Our new Regency range is ideal for new build and refurb projects in all areas of England,” added Jason. “We also offer a tumbled option – processed using our new facilities at Bridgnorth – which exactly replicates the look and appeal of reclaimed bricks. This is available on a slightly longer lead time due to the processing, but customers tell us it’s well worth the wait as the tumbled bricks are indistinguishable from original reclaims!

“Every time we send developers to see these bricks in use/build, these are the bricks they end up selecting/specifying. I would strongly recommend all merchants supplying bespoke rural properties to consider these bricks.”