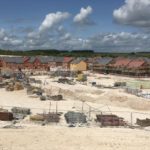 Two competing timber frame specialists are collaborating in a partnership to deliver 450 new homes for military personnel returning home from Germany, as part of the Ministry of Defence’s re-basing programme.

Stewart Milne Timber Systems (SMTS) and Taylor Lane Timber Frame have been appointed by contractor, Lovell, to provide timber frames for the Larkhill residential scheme, which is being constructed on Salisbury Plain in Wiltshire, on land which has facilitated British Army training exercises since 1898.

The initiative is part of a wider Defence Infrastructure Organisation project which aims to deliver 917 homes on the land across three sites at Larkhill, Bulford and Ludgershall – built to house forces personnel as they return from bases in Germany.

Each specialist initially worked on separate sites, with SMTS at Ludgershall and Taylor Lane at Bulford. They were then asked to collaborate to build 450 properties at Larkhill site between them across an almost 30-hectare site in a 50/50 split (225 plots each), delivering around 16 units per week.

Alex Goodfellow, Group Managing Director at Stewart Milne Timber Systems, said: “Larkhill on Salisbury Plain is an exemplar project highlighting what can be achieved through collaboration within the industry. It is rare for two competing firms to work together on such a project, but through sound communication and clear direction by Lovell from the outset, we are working well together to deliver on Lovell’s largest ever pure contracting scheme.”

Barrie Lane, Managing Director at Taylor Lane Timber Frame, said: “The success of this project to date is directly attributable to the professionalism, focus and dedication of the project teams. Everyone played equal parts in making this job work. The relationship with the client is key and their understanding of our requirements and collaborative attitude helped make this joint development an outstanding success.”

0 0 0 0
Previous : Report reveals slowdown in housebuilding
Next : Developments #19 | Updates on projects across the UK