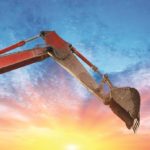 The UK construction sector readies itself for a ‘digging boom’

The UK is set for a ‘digging boom’ this year, according to Digging up Britain 2021. The annual safe digging report by LSBUD reveals that construction companies, contractors and the general public used lockdown to plan for almost one million projects, including house and road building, extensions and road maintenance.

These are likely to get started as lockdown restrictions ease then lift, swelling the estimated four million projects which routinely take place each year.

Before any project involving digging commences people must do a search to check what underground pipes or cables may be in the way. The vast bulk of these searches are done through the LSBUD portal. As a result, the company provides an accurate barometer of excavation activity taking place in the UK. In 2020, searches relating to future projects hit 904,120, a massive 235,334 increase on 2019. This meant future planning accounted for an unparalleled 29 percent of all searches.

Richard Broome, Managing Director at LSBUD, comments: “Given that over three quarters of all digging work that takes place in the UK is preceded by a thorough search on our portal – that’s over three million projects every year – it’s safe to say that our data provides a clear picture of what’s going on in the digging world. And that data is telling us loud and clear that the construction industry is heading for a digging boom!”

As restrictions continue to ease, not only will many of the almost one million planned projects commence, but also all the construction which was halted in 2020 will get underway. Added to this will be the onset of projects financed by the Government’s plans to kick-start the UK’s economy through large scale infrastructure. One example is HS2, with construction on the UK’s biggest project in generations ramping up substantially this year.

The Digging up Britain report outlines where the UK’s digging is coming from and the type of work that is taking place. The majority of excavation work is being done on behalf of the telecoms sector, 36 percent of the UK’s total.

The dominance of telecoms work is partly a result of the Government’s £5 billion strategy to deliver next-generation, gigabit-capable broadband to the entire country. The UK Gigabit Programme is set to connect one million properties to gigabit broadband by 2025.

The water industry comes next with 27 percent of the UK’s digging. Other big movers include agriculture projects, such as tree planting and resurfacing gateways and tracks, and domestic works, such as building sheds.”

Richard Broome adds: “We’re seeing more members of the public digging than ever before, repairing driveways, building conservatories and extensions, and putting in new fencing. COVID has clearly led people to think more about their home environment.”

Hitting an underground pipe or cable can be incredibly dangerous and disruptive, so with a surge in digging activity predicted, it’s good news that the UK’s underground infrastructure is better protected than ever, as are those that work nearby.

Richard Broome explains: “Our data shows that searching on our portal before digging is second nature not only for the majority of construction workers and contractors, but also, increasingly, for the general public, which is fantastic to see. This is brilliant news as the UK gears up for this digging boom.”

To download a copy of Digging up Britain 2021, visit www.lsbud.co.uk/digging-up-britain-report