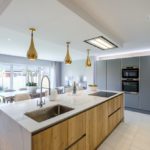 Moores has announced the completion of its first volume Roux Kitchen project with Duchy Homes.

Roux Kitchen – a luxury collection designed by British contract kitchen manufacturer Moores in Michelin-starred chef Michel Roux Jr. – was selected to feature in all nine of the Duchy Homes’ exclusive five-bedroom houses in the recently launched Cygnet Gardens development on the edge of the Yorkshire Wolds. The development is one of the first in the north of the UK to feature the Roux Kitchen.

Kath Halloran, Senior Kitchen Designer, Private Developer Team at Moores, commented: “We are absolutely delighted with the final design of this development. The Roux Kitchen is the ideal backdrop for the passionate cooks and sociable families that will soon live here. Duchy Homes specified Roux Kitchen after being impressed by the collection showcased at our headquarters in Wetherby. It met the development’s high-end design and exacting quality standards”.

Jim Cropper, Yorkshire Managing Director for Duchy Homes said: “If I had to score it, it would be 11 out of 10, the best show home I have seen in 40 years in the industry”.

The Roux Kitchen is a premium offering for housebuilders, designed by Moores after industry insights revealed a need for a professional-inspired kitchen for luxury developments.