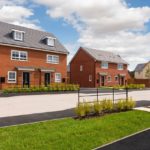 Barratt Homes’ Prescot development, Rosaline Gardens, has now sold out due to a high demand for properties in the area.

The sought-after Manchester Road development has delivered a range of 150 luxury new homes to the area. The development, named after the Shakespeare character, Rosaline, in Love’s Labour’s Lost, is now thriving due to a great community developing.

Michaela Lancaster, Sales Director at Barratt Homes Manchester, said: “Rosaline Gardens has proven a popular development and we are not surprised that the homes here have now sold out.

“The development had become very well-established in the area as the range of homes available attracted a variety of buyers, all of which had different lifestyles and priorities, but there was something for everyone.

“For those still looking to find their dream home in Merseyside, there are a range of three bedroom homes available at Imagine Place in Speke and new homes will be coming soon at Pinewood Park in Formby.”

Imagine Place is located just a few miles from Speke and Garston Coastal Reserve, a beautiful place to walk the dog or explore with the little ones.

In addition to this, for commuters, the M62 is close by as well as Hunts Cross Train Station which will transport residents to Liverpool in just 40 minutes.

Pinewood Park is an exciting development launching at the start of December. Nestled into the borough of Sefton, the Liverpool Road development is just a short drive away from the wild and picturesque coastline of Formby beach.

The Formby development will provide a range of 393, two, three and four bedroom homes for the local community.

As a thank you to the NHS and the Armed Forces, Barratt Homes has also introduced a new 5% Deposit Scheme. To assist military personnel and NHS workers with the purchase of their home, they will be offered a 5% deposit contribution, up to £15,000.