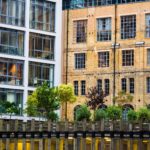 New towns: the end of the road?

Just 10% of the UK population believes that the construction of new towns is the best way to tackle the UK housing crisis, according to a new report.

The research has been published by Eurocell plc, the UK’s leading manufacturer, distributor and recycler of PVC-U window, door, conservatory and roofline systems. It highlights a reticence around the concept of new towns since the construction of places such as Milton Keynes and Telford in the mid-twentieth century.

By contrast, 43% of those surveyed would prefer the conversion of old, unused buildings and the regeneration of run-down communities or brownfield sites.

Only 4% said they would favour the construction of a greater number of high-rise buildings – a solution that is currently being implemented in high-density population areas such as Manchester and London.

New towns have been proposed as a possible answer to the current housing shortfall. This has led to the development of plans for a new town in Ebbsfleet and as many as five being proposed along the Cambridge-Oxford corridor.
Consumers were asked about the challenges they saw in plans for projects such as these coming to life. A third believed that ‘not in my backyard’ attitudes of residents would hamper approvals, with a further 24% saying that a lack of collaboration between planning authorities and infrastructure providers would make these new developments problematic. The same number again identified environmental concerns as a major obstacle.

Respondents also highlighted a number of challenges when it came to the conversion of unused buildings and the regeneration of run-down communities or brownfield sites. These included cost (37%), planning authorities lacking the power to reclaim old buildings (31%), listed building status preventing regeneration (27%) and planning authorities placing too much emphasis on new builds (23%).

Chris Coxon, head of marketing at Eurocell, added: “We need to build in excess of 300,000 new homes per year for the next decade to clear the current shortfall. It is therefore vital that a wide variety of options is considered.
‘This research clearly suggests that there is a preference amongst the UK public for regeneration and the use of brownfield sites, but demand for these spaces is almost certain to outstrip supply. It is far more likely that a balanced mix of all approaches will be required. It’s therefore important that residents’ concerns over the potential impact of new towns are taken into serious consideration.”

The research is part of Eurocell’s ‘Future Communities’ report which can be downloaded in full here.

0 0 0 0
Previous : Hayfield secures £85m finance facility to grow to 500 homes per annum
Next : Hill and Goram Homes to create £55m waterside destination in the heart of Bristol