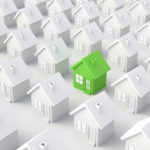 New research has shown that more than three quarters (77%) of people in the housing market are likely to choose a green home for their next purchase.

70% of people looking to get on, or move up, the housing ladder are also willing to pay more for better energy efficiency.

The Green Homes Report: What Buyers Want, commissioned by law firm Shakespeare Martineau, included a survey of more than 500 first time buyers and those on the property ladder looking to move into their next home this year.

“With bills high on the agenda of many homeowners, now is a good time to increase adoption of green home technology, ahead of 2025 building regulations for net zero coming into force,” said Neil Gosling, head of residential development at Shakespeare Martineau.

“Our research also shows that buyers are willing to pay more for features like renewable energy sources and energy-saving measures such as triple glazing – indicating a commercial incentive for developers.”

More than a third (34%) of homebuyers also wanted to reduce their carbon footprint and get ahead of the curve, stating: ‘I think eventually all homes will need to be green so I will pre-empt this.’

Despite a significant uptake, more than 1 in 3 (35%) respondents who were likely to purchase a green home said they wanted to understand more about how it would benefit them in the future, indicating a gap in knowledge and understanding.

Neil added: “Housebuilders should be doing more to emphasise the health and economic benefits of green homes in their marketing.”

The results also show that age, social class and gender are influencing factors in demands and expectations of green homes.

Neil said: “It’s probably no surprise that the millennial generation is most likely to opt for a green home. This leans into the stereotype that younger generations are more concerned about the environment and also reflects the ageing first time buyer population.”

First time buyers are more likely to consider a green home (80%), compared to 73% of second-time buyers. Currently the average age of a first time buyer is 34.