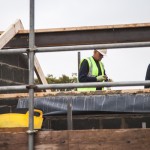 The number of new build homes started or completed in England between April and June 2020 fell to their lowest levels since the year 2000 as Covid-19 hit the construction industry, according to new figures.

The figures also show, despite Covid, a longer-term decline in housing starts and completions, with the number of homes started or completed in the year to June 2020 also showing a sharp fall.

According to the Ministry of Housing, Communities and Local Government, the indicators of new housing supply figures should be regarded as a leading indicator of overall supply.

Clive Docwra, managing director of property and construction consultancy McBains said: “Today’s statistics bear out the huge impact that Covid-19 – and in particular the Spring lockdown – has had on housebuilding rates.

“The government target of building a million new homes in the new five years was always going to be a steep challenge, but the pandemic has dealt a heavy blow to that ambition.

“The industry is now facing a double-whammy – trying to recover from the impact of Covid but also suffering from the uncertainty over a Brexit deal – with investors holding off putting money into new developments until the picture on a withdrawal agreement becomes clearer.

“The Government will no doubt point to its recent planning White Paper as the answer to building more homes, saying that it will mean‘permission in principle’ will be given to developments on land designated for renewal to speed-up building, but the uncertainty and resulting fluctuating values driven by Covid and Brexit are reducing the incentive on developers to build in the short term.

“The government could address this by temporarily staggering or deferring Section 106 planning obligations – where developers are asked to provide contributions for community infrastructure – so that developers are encouraged to complete housebuilding projects as soon as possible.”

0 0 0 0
Previous : Cavanna Homes and Kohler Mira mark 15-years and counting with latest development
Next : Landmark partnership between Anchor Hanover and McCarthy & Stone launched to deliver ‘affordable for all’ retirement solutions