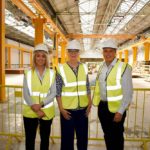 The certificate awarded by the BBA allows the company to construct six-storey buildings using the Triso-Warm product. Until recently, they could only use it up to four-stories. The certificate was granted after the company has demonstrated the product’s efficiency, sustainability and cost-effectiveness, as well as passing several tests conducted by the BBA to ensure its competence, durability and safety on higher storey builds.

Sevenoaks Modular is due to complete a £10 million housing development in Pentland Close, Llanishen, Cardiff – where the Triso-Warm system is being implemented to meet the requirements of Wales and West Housing Association to ensure thermal efficiency is met for its future residents. The project involves the build of five three-storey blocks – with large parts of the build – including installed doors and windows along with external cladding – being manufactured off-site.

Charlotte Hale, Director of Sevenoaks Modular, commented: “This is an exciting time for Sevenoaks Modular as we are offering a product that is much sought after in the current climate of fuel poverty in Wales – and we are happy to be able to provide a solution to help people stay warm, without it costing money that some households are unable to afford.

“We have had great feedback from the social housing developments and other clients that have used Sevenoaks Modular to install our Triso-Warm insulated panel modular build system. We are thrilled to have been awarded the next level certificate by the BBA to enable us to now use the product on six-storey builds.”