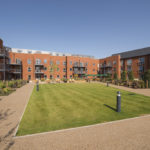 McCarthy & Stone, the UK’s leading developer and manager of retirement communities, celebrated the opening of its 100th housing with care development, located in the city centre of Salisbury, Wiltshire.

Known as Retirement Living PLUS, McCarthy & Stone’s housing with care product (also called Extra Care housing) is the most successful and widespread of its type, with the group being one of the largest operators in the housing with care sector and the largest in the private sector, delivering more new dwellings of this form of housing each year than any other organisation.

Its 100 Retirement Living PLUS developments offer private apartments, on-site care and support services that are delivered by McCarthy & Stone and registered with the Care Quality Commission, and a wide range of facilities such as restaurants/bistros, lounges and well-being suites. The company now supports more than 5,000 homeowners and provides more than 40,000 hours of care and support a month across these 100 developments, as well as serving more than 80,000 meals a month. These communities are in addition to McCarthy & Stone’s 341 Retirement Living developments, which provide more independent living for c.15,000 people. All 441 of its communities opened since 2010, when the company established its own care and management services team, retaining full operational involvement for its schemes.

The 100th Retirement Living PLUS development in Salisbury, known as Monument Place, will offer a choice of 63 private apartments across a range of tenures, with a communal lounge, an on-site bistro serving freshly prepared meals daily, and care and support services on site.

The launch in Salisbury comes just over a year since McCarthy & Stone fully integrated its care business, known as YourLife Management Services Limited (YLMS). YLMS was previously run as a 50/50 joint venture with Somerset Care Group and became a wholly owned part of McCarthy & Stone in July 2019. All regulated care, domestic support and property management services are now delivered directly by McCarthy & Stone, and the 100th Retirement Living PLUS milestone is a key part of the company’s commitment to strengthening and deepening its relationships with its customers.

John Tonkiss, McCarthy & Stone’s CEO, said: “We’re thankful that our retirement communities have so far seen a limited impact of Covid-19 and they have proven to be a safe haven for older people during these challenging times. This has shown that we need more and better housing and care options like this for older people across the country. Just over a year since we brought our care services fully in-house as an integrated offering, we recognise the important role our developments can play in supporting our increasingly ageing population, helping them feel safe and supported while maintaining their independence in later life.

“This milestone development highlights our commitment to growing our care and services business, something which is integral to our wider vision of creating even deeper and longer relationships with our customers. We are also working closely with Government to ensure our sector can deliver more housing and care to support our ageing population.”

The announcement follows another McCarthy & Stone landmark announcement. A unique partnership with Anchor Hanover was unveiled earlier this month which seeks to deliver c.500 ‘affordable for all’ later living communities across England as part of their continued commitment to provide even greater choice and access to care and support for older people.