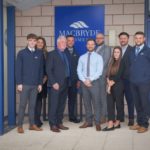 St Asaph-based Macbryde Homes has increased its team by a quarter as it continues to capitalise on demand for new homes across North Wales and the North West of England.

The family-owned business is currently working on several developments across North Wales with a further two to start imminently. Its pipeline of future developments is such that the business decided to invest in the team at all levels.

In all, eleven appointments have been made ranging from trainee, through to Director-levels roles. Managing Director Gwyn Jones who has led the business for the past 18 months, commented on the growth and continued success of the business: “Macbryde Homes has enjoyed rapid growth in recent years and with a buoyant and growing pipeline of work in place, we knew it was time to bolster our ambitious and committed team in order to further drive the business forward.

“In order to exploit the growth opportunities ahead in a well-managed fashion, we have carefully recruited a number of new roles.  We have focused on bringing in candidates who possess attributes and values that suit the business and its core values of teamwork, dynamism and on always being the best.”

Whilst all of its current sales sites are in North Wales, Macbryde Homes has several sites in its pipeline across the North West of England which will go live during 2020. To support this growth strategy, Paul Hayes has taken up the role of Land & Partnership Manager, joining from Countryside.

He is joined by Eoin O’Donnell who has taken on the role of Preconstruction Director having built a wealth of experience in roles at Redrow Homes and Galliford Try; Craig Evans who joins from Countryside as a Design & Technical Co Ordinator; and Michael O’Toole who has joined from Taylor Wimpey as Project Manager. Further appointments have been made in architectural roles, services, on-site roles and sales. However, with the future of the business very much front of mind, investment has also been made in entry-level roles as Gwyn explains:

“Earlier this year, we appointed Tom Fletcher to the role of Trainee Quantity Surveyor. We are firm in our belief that building a successful career is defined by a mix of the right qualifications and experience, but also the right attitude and a demonstrable enthusiasm to contribute meaningfully to the vision of the whole team.

“Tom is a perfect example of this, and I feel sure that him joining at this exciting time will provide him with a great start to his career.

“The continued growth of our business means we’re not only delivering much-needed homes across the region, but that at the same time we’re also providing high-quality jobs to local people and thus boosting the regional economy further.”

Macbryde Homes’ recruitment drive is anticipated to continue with a vision to further increase the workforce by another quarter over the coming year.