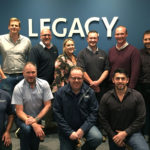 Set up by the Ministry of Defence, The Armed Forces Covenant is a declaration to former servicemen and women, and their families, that they will be treated fairly and not be disadvantaged in their day-to-day lives.

Legacy has in place a fair recruitment policy for armed forces personnel; healthcare benefits which include cover for mental health; and allows extra leave for volunteers with local cadets and for reservists who require time off for training and deployment.

Currently, nearly a quarter of full-time staff at Legacy are from military backgrounds and are in key managerial positions across the business.

Nick Long, Managing Director at Legacy Properties said: “We value our veterans highly as they are reliable, hardworking and trustworthy team members with the skills and know-how to remain calm in a continually pressured and potentially hazardous working environment.

“We particularly value the strong work ethic of our veterans, their high level of productivity, respect for confidentiality, their community relations skills, and the ability to tackle complex projects with ease while working to high standards.”

Charlotte Olford, Office Manager at Legacy Properties, served for three years in the Women’s Royal Army Corps (WRAC) and Royal Corps of Signals as a data telegraphist. She is actively involved with the Par Armed Forces and Veterans Breakfast Club and is currently organising Vet Fest, a unique new festival organised by veterans for the community, to be held from 5 to 7 July in Lanescot, near Par.

She says: “As an armed services veteran, it’s important to be able to give back and support others who have made the transition to civilian life. Too many people think of veterans as disabled, or in poor mental health, yet many are giving a lot back to the community and have highly relevant skills for business and industry.”

Vet Fest will include entertainment from 15 Cornish bands, stalls with local produce, and a competition between the armed forces and the general public. Legacy is a key sponsor of the event and has allowed time for Charlotte to make preparations.

0 0 0 0
Previous : Construction completes on second phase of Cheshire retirement village
Next : Developments #18 | Updates on projects across the UK