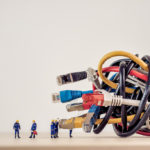 Home of the future: Smart devices set to rise to over 278m

According to new research from Zen Internet, potential homebuyers are fed up with ugly technology being on show. Almost three in five (57%) of those surveyed thought wires around the home were the most unsightly of the lot.

This was closely followed by daisy chained extension leads (43%), whilst three in 10 said they disliked the plastic clunky look of technology (30%) around the home.

With the average household in the UK currently having nearly nine connected or smart devices in their home, equating to over 250 million devices across the UK, there is a lot of tech on display.

This number is set to increase to 10 per household in the near future (approx. 278 million across Britain), meaning homes will be more connected than ever post-pandemic.

Despite being integral to everyday life during lockdown, currently over half (55%) of those planning to place their router in the living room, will hide it out of sight. Whilst many may want to bury it away, objects or walls in between can interfere with WiFi reach and potentially cause sluggish internet.

As a result, potential homebuyers are calling on housing providers to solve ugly tech issues, with seven in ten (70%) agreeing that technology should be an integral part of the home and not hidden away.

Richard Tang, Founder & Chairman, Zen internet said: “There is a fine balance when it comes to aesthetics versus practicality in the home. Whilst wires and extension-leads can be tucked away and out of sight, the same shouldn’t be said for your broadband router. The radio waves emitted by these devices can be blocked or weakened by walls, certain types of plasterboard, metal and other objects, so where you place the router in your home does need some consideration. As tech becomes the fabric of every home, housing developers could do well to respond to consumer desires when it comes to incorporating it into a home’s design, from both a functional and aesthetic point of view.”

Post-modern sleek
The whole conversation about the home of the future could be stopped in its tracks, though, with broadband connections that are not fit for purpose.

According to the survey, nearly half of respondents (46%) are not confident their current broadband can handle any more connected devices.  This comes as respondents predict that just two years from now, every gadget will be connected to and controlled from one master device, such as a mobile phone (45%) and in five years, nearly a third (32%) expect to be able to command everything in the home by voice.

Similarly, when thinking about the homebuying process, in five years’ time, 58% expect broadband will be installed from day one as standard, new builds will come with connected locks rather than physical keys (40%) and appliances such as fridges, freezers and washing machines will be digitally connected (27%).

Tang concluded: “The reliance on internet connectivity in our homes has been heightened even further over the past year and a half, as families battled it out with all their digital devices under one roof during lockdowns. The increase in connected devices is likely to grow even further over the next year, which is why homebuyers will want to check the broadband in their new place will be able to cope with all the extra bandwidth required to cater to the smart devices they will want in their home.”

Tang’s Top Five Tips for improving connectivity around your home:

1. Don’t hide your router away
Hiding it behind something, in a drawer or cupboard isn’t doing it any favours. The best thing to get a WiFi signal from A to B is line of sight. Walls, cupboards, even electronic devices that are in the path of your signal could degrade it… and this will result in a weaker WiFi signal for your devices.

2. Place it in the heart of the house
Try to find the most central home for your router that you can – don’t consider the placement of your main computer to be a limiting factor. It will help if you spend some time thinking about what could get in the way of your signal.

3. But, avoid the kitchen
When it comes to battling potential buffering of your WiFi, the microwave and other kitchen appliances are not your friend. They interfere with signals so it’s preferable to keep your router out of the kitchen or away from cordless phones, baby monitors, wireless speakers and the like.

4. Consider mounting the router on a wall or in a corner by the ceiling
Radio waves generally spread out and towards the ground, not up, so it’s worth putting it on the wall or second floor (if you have one). This will also help to keep it out of reach of pets and children. Not only is it a danger hazard but there are several wires and buttons that can be broken or damaged.