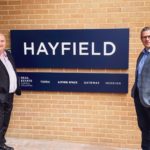 Hayfield has received a RoSPA Silver Award in the first year it has entered the internationally recognised scheme for high health and safety standards.

Organisations receiving a RoSPA Award are recognised as being world leaders in health and safety practice. Every year, nearly 2,000 entrants vie to achieve the highest possible accolade in the UK’s longest running awards of its kind.

Hayfield specialises in building high specification eco-friendly family houses and has seven live sites located in prime locations in Oxfordshire, Bedfordshire, Cambridgeshire, Buckinghamshire and Wiltshire where over 500 homes are currently in progress. The company has offices in Solihull and Milton Keynes.

Andy Morris, Managing Director of Hayfield said “While the housebuilding industry has experienced over a year of unprecedented challenges and stringent site-based social distancing restrictions, we have also grown this business at a rapid pace. Having the highest health and safety standards has been imperative to increasing the number of luxury homes we deliver this year to 300.

“The appointment of Andy Green as Head of Health & Safety in January 2020 was a key part of Hayfield’s growth strategy. The timing could not have been more significant, ahead of the global pandemic and the new challenges faced in keeping our workforce safe. To be recognised just 12 months on with a RoSPA Silver Award for good safety management systems – and enabling Hayfield to operate with Covid-19 compliance – is testament to his work and the commitment by Hayfield’s staff, contractors and customers to ensure everyone gets home safely to their families at the end of every working day.”

Julia Small, RoSPA’s achievements director, said: “The RoSPA Awards scheme is the longest-running of its kind in the UK, but it receives entries from organisations across the globe, making it one of the most sought-after achievement awards for health and safety worldwide. RoSPA is very proud of the achievements of its entrants, and with this award we recognise the best of the best, those organisations that have gone the extra mile, raising the bar for the delivery of safety in the workplace.

“Employees, wherever they may be, should be able to go to work safe in the knowledge that they will return home unharmed and healthy at the end of every day. Our RoSPA Award winners are central to achieving this goal. By entering, they are driving up standards and setting new safety benchmarks for organisations across the world. Currently, around seven million people are directly impacted by the RoSPA Awards, but the scheme’s global influence is even wider – with nearly 2000 organisations from 46 countries represented this year.”

Earlier this year, Hayfield retained its five-star customer satisfaction rating in the second year it has participated in the esteemed star rating scheme run by the Home Builders Federation (HBF). 96.4% of the luxury housebuilder’s customers would recommend Hayfield to a friend. To coincide with the HBF announcement, market research company In-house Research Ltd also awarded Hayfield an Outstanding Achievement award for customer satisfaction, acknowledging the company’s placing in the top 10% of housebuilders measured by its wholly independent survey.

Hayfield won Gold and Bronze accolades at the 2020 WhatHouse? Awards and has also received three Pride in the Job NHBC Awards.

0 0 0 0
Previous : Product Spotlight: Bricks & Blocks | The alternative option
Next : Most and least affordable areas of England for first-time buyers revealed