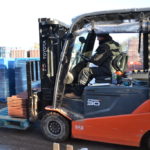 Burton Roofing Merchants is replacing the diesel-powered Toyota counterbalance trucks in operation across its 13 UK depots with electric-powered models also from the Toyota range.

The decision to switch from a diesel to electric fleet was prompted by concerns over the rising price of fuel following the announcement that the Government is planning to prohibit the use of red diesel in forklift trucks.

In the March 2021 Spring Statement The Chancellor of the Exchequer revealed his intention to withdraw the right to use red diesel from companies operating in a number of sectors and user groups – including transport and logistics. In effect this means that transport and logistics firms will no longer be able to purchase or use red diesel (which gets its name because it is literally coloured with a red dye to allow it to be identified and prevent its use in road vehicles) to fuel diesel-powered forklift trucks. The new rule will come into effect from 1st April 2022.

A fuel cost analysis was undertaken at each of Burton’s 13 sites. Based on the current price of diesel and electricity, the figures showed that over a five-year period, electric trucks represented a considerably more cost-effective option.

Initially, Burton introduced new electric trucks at two of its depots in the south of England. The company is now in the process of rolling out electric counterbalance machines at all UK facilities.

The model specified is the Toyota Traigo 80 8FBMT30. This 4-wheel counterbalance truck offers a nominal 3000kg lift capacity and is designed for heavy-duty applications.

0 0 0 0
Previous : Plans for 182 new homes at Ebbsfleet Garden City get the go ahead
Next : British Gypsum launches new training offering