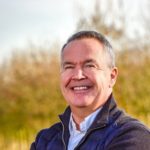 Chris Musgrave, Managing Director of Flaxby Park Ltd, has been recognised in the Queen’s birthday honours list for 2019.

The developer behind plans to transform a disused golf course close to Harrogate into a sustainable new community, has been recognised in The Queen Birthday Honours, receiving an OBE.

Entrepreneur Chris Musgrave, is Managing Director of Flaxby Park Ltd. He started in business in his home town of Hartlepool with his dad aged just 12, and is now renowned for transforming disused and underperforming sites into successful large-scale developments. Chris receives his honour, ‘for services to Business and the community in the Tees Valley.’

Chris plans to build 2,750 new homes on Flaxby’s disused golf course as well as a retirement village, two primary schools, a GP surgery, sports facilities, a hotel and a new village centre. Almost 50% of the site will consist of green space and Goldsborough Railway Station will be reopened offering direct rail services to Harrogate, Leeds and York.

The businessman and philanthropist has credited his late father Joe with instilling in him the business acumen that led to him being honoured by The Queen.

Chris said: “I took an unconventional route into property. From 12, I worked with my dad selling meat in pubs and clubs and from 16 worked as a market trader selling fruit and vegetables, a chance encounter resulted in me buying and selling a one-off batch of supermarket shelving. Within a few years I was supplying shelving to major supermarkets and retailers throughout the UK, through my company JCM, which in six years went from employing six people to more than 250 people, with a turnover of over £10million.”

Chris sold JCM in 1998 and he acquired several industrial and commercial properties. One of which was a redundant business park where he has since created the 700-acre mixed use Wynyard Park development near Middlesbrough. By 2015 Wynyard Business Park was home to 60 companies, employing more than 2,500 people.

Chris added: “We sold Wynyard Business Park to the Duke of Northumberland in 2015, and Discovery Park in 2016, so we could concentrate on building thousands of high quality new homes in the Wynyard area, as well as other quality housing sites across the UK. I’m now really looking forward to building on this success at Flaxby Park, which has the potential to be the jewel in the crown.”

Chris added: “When I was told about the award I immediately thought about my late father Joe and my mother Mary. No-one could have had better parents and the OBE is as much for them as for me.”