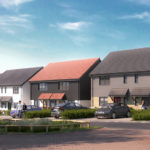 Etopia Homes, the development arm of a modular housing and technology company that is backed by the Reuben Brothers, has become the UK’s first developer to commit to achieving an EDGE Zero Carbon certification.

Launched under the UN Secretary General’s Zero Carbon for All Initiative and backed by the UK Government, the certification recognises homes that achieve a 100 percent reduction in operational emissions using low-carbon technologies such as air source heat pumps and sourcing power from renewable energy.

The EDGE Zero Carbon certification has only been awarded to three other developments in the world, all of which were office buildings overseas.

As a signatory of the UN Climate Neutral Now initiative, Etopia Group have calculated and disclosed the current carbon footprint of the company, including international air travel, and show a clear pathway to reducing it year on year.

The EDGE certification process is taking place at Etopia Homes’ development in Wilburton, Cambridgeshire. Branded Juniper Place, the scheme is delivering 30 ‘zero-carbon’ homes on the site in Cambridge – 21 of which will be for private sale and 9 for affordable.*

By using low-carbon technologies, sustainable building methods and materials, and smart devices that can model a home’s energy performance, all the homes are expected to achieve an energy performance certificate rating (EPC) of over 100, ranking them well-above the highest category of ‘A’. In the UK, only one percent of newbuilds are ‘A’ rated, while the average rating is ‘D’.

The announcement follows the introduction of new building regulations that require new homes constructed from this year onwards to produce 31 percent lower carbon emissions compared to previous standards. This is in preparation for the Future Homes Standard, which will require homes to have “low-carbon heating” and to be “zero-carbon ready” by 2025.

Etopia Homes’ commitment to achieving the EDGE Zero Carbon certification is the first step in a three-part process. The commitment will require Etopia Homes to:

It is partly thanks to Etopia Homes’ utilisation of sensor technology that the company has been able to become the UK’s first developer to commit to the certification. As part of the project, Etopia Homes will install sensors on each floor of the 30 homes. The technology will collect data on the energy usage of each home and help residents automatically optimise performance. For example, if a home is using more heat than required, the technology will automatically adjust heating levels to ensure that energy isn’t being wasted.

For context, a fifth of the UK’s total carbon emissions are due to heating buildings, according to the National Grid.

Joseph Daniels, CEO and Founder of Etopia Group, says: “The UK is in the midst of a dual crisis: climate change and a shortage of homes. If Government and industry are to tackle these head on, then there’s an urgent need for the built environment to be dragged into the 21st Century by bringing forward innovative technologies in both the methods of construction and the homes themselves.

“Our commitment to achieving the EDGE Zero Carbon certification at Juniper Place is just the beginning of our journey to revolutionising the delivery of green homes across the UK. Our data-led, technology-driven approach will ensure that we’re able to meet the certification’s stringent criteria, optimise our methods of delivering zero-carbon homes, and actively offer a ready-to-go solution to the UK’s climate change and housing crises.”

Eleni Polychroniadou, commercial director at Sintali, the body responsible for certifying buildings to the EDGE Zero Carbon standard, says: “Project Etopia has taken a position of leadership in the UK market as the first residential developer to commit to EDGE Zero Carbon certification. There is an urgent need for green housing in the UK, and the world as a whole. By committing to certifying homes through an internationally-recognised green building standard, Project Etopia are encapsulating the vision that every home on this planet can be green, and delivering it in a quantifiable and verifiable way. We look forward to working with Project Etopia and hope this is the first of many certified net zero homes in the UK.”