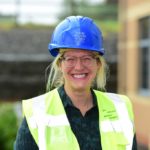 For the fourth consecutive year, David Wilson Homes is celebrating after Derbyshire Senior Site Manager Zoe Stothard won a top national award for the quality of homes she is building from the National House Building Council (NHBC).

Zoe has received a Pride in the Job Quality award from the National House Building Council (NHBC) for overseeing the construction at David Wilson Homes’ development in Mickleover.

She said: “It’s really great to be recognised for a fourth successive year, and this award is just as special as the first. The longer it goes on, the harder you want to work to win the following year. It’s an obsession!

“Having been on site in Mickleover since the beginning of the development, it’s nice to look back and see how much it’s progressed as a community with established landscaping.

“I’d like to thank my husband for his total understanding of the job pressures and also my site team for their continued hard work.”

Known as the “Oscars of the housebuilding industry”, the Pride in the Job Quality Awards recognise the best run building sites in the country and are the highest accolade a Site Manager can achieve.

In celebration of Zoe’s award, leading developer David Wilson Homes East Midlands is encouraging more women to consider careers in the construction industry, with a variety of roles available across Derbyshire.

Zoe added: “During my time in the industry I have seen more and more women come in to the profession and David Wilson Homes encourages this by treating everyone equally regardless of their gender.

“For women looking to join the construction industry I would advise them to treat everybody on site as they would expect to be treated. This is a tough job regardless of gender so they should be prepared to work hard.”

Zoe – who also won an award within her East Midlands division – first joined the five star housebuilder 15 years ago as an Assistant Site Manager and has worked her way up to being a Senior Site Manager.

She was originally attracted to the industry because of the opportunity to work outdoors in a challenging environment.

Now in their 40th year, the awards – considered to be the “Oscars of the housebuilding industry” – recognise the very best Site Managers from around the country.

Each Site Manager is judged on a range of key criteria including health and safety, their technical knowledge, customer service and attention to detail. Pride in the Job is the most highly regarded competition in the housebuilding industry with just 450 individual winners being chosen from over 11,000 entrants.

John Reddington, Managing Director at David Wilson Homes East Midlands, said: “It’s fantastic to see that Zoe has been rated amongst the very best Site Managers in the country once again.

“It’s now more important than ever that customers have confidence in the homes they are buying, and the mark of a Pride in the Job Quality award shows that their home has been built to the highest of standards. We are very proud to have won more of these quality awards than any other housebuilder for 16 years in a row.”