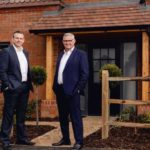 Change at the top for Hayfield

Hayfield has appointed Andy Morris as its new managing director, with current MD Mark Booth becoming chairman as the business hopes to surpass its turnover target of £100 million for this year.

Morris, Hayfield’s former operations director, has been promoted to the post with immediate effect, having worked alongside co-founder Booth since 2006 when he joined the Midlands branch of Banner Homes. In 2011, he was promoted to contracts manager at the housebuilder.

After CALA’s acquisition of Banner in 2014, Morris progressed to the role of construction director through other firms. He joined Hayfield in 2018, reuniting with Booth and other former colleagues.

In January 2020, Hayfield secured £85 million of new equity and debt finance, with the Solihull-based business then growing 25% during the year despite “the unprecedented challenges encountered by the industry”.

Hayfield said that its target of doubling turnover during 2021 to £100 million “could well be surpassed”, owing to “remarkable” sales during the first four months of this year which have produced an £82 million current order book.

The business is set to deliver more than 300 homes across middle England at eight “eco-friendly” schemes.

On Morris’ promotion, Booth said: “The timing is right for us to acknowledge the vital role Andy Morris plays in driving this business forward day in day out. He has recently recruited a senior team of highly experienced construction professionals, enabling him to progress to the role of managing director.

“The whole company is behind this internal promotion, and it will enable me to invest more time in the continued growth and diversification of Real Estate Capital Holdings, which is Hayfield’s parent company.”

“I am delighted to become managing director of this brilliant business and relish the challenge of working towards our goal of delivering 500 homes a year.”