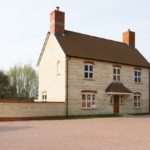 When Aquinna Homes received planning permission for an eight-unit development at the Boatyard in Yarnton; it was required to deliver houses that were in keeping with the local architecture, yet not uniform, as most of the nearby canal buildings date from different periods and are in different styles.

In order to help achieve this, Aquinna opted to build two of the properties using the Heathland Autumn tile. David Chidlow, Technical Director at Aquinna Homes, explained: “The planners made it clear that they didn’t want eight boxes and, with each house having to have a different look, we chose the Heathland tile because the colour choice is tried and trusted by us, and its sanded finish works well with the facing brick that we like to use”.

BMI explains how to be ‘Torch Safe, Not Sorry’

One of the four-bed houses features a catslide roof that extends right from the ridge down to just over the rear door, while its other roof extends over a dormer window and a large car port to the front of the house. “In our opinion, Heathland is better than a smooth tile in appearance and we’ve used it in many of our other developments. The roofs are a prominent expanse of tiling and a major part of the house so you need to make the right choice,“ David concluded.

The Heathland tiles offer irregular sides and varying hanging lengths, and surfaces that are subtly textured with fine sands. The result is a tile that combines a natural weathered character with machine-made performance. Autumn is just one of the colours in the Heathland palette of period colourings that complement its handmade appearance. Wealden Red, Ember and Elizabethan share the sanded finish of Autumn while Manor House is granular.