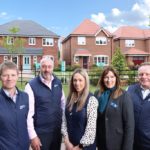 Five years and 500 legal completions since announcing its first development site, Anwyl Homes Lancashire is looking ahead to the next phase in its growth.

With 10 sites acquired over the last five years – three of which are already either build-complete or sold out – the Chorley based business has set its sights on expansion into the Manchester City Region.

John Grime, Managing Director, said: “In our first five years of being active, our main areas of operation have been central and west Lancashire, plus parts of Merseyside, with several developments around Preston, as well as sites in Burscough, St Helens, Prescot and Liverpool.

“We’re now actively pursuing land in new areas, especially the Manchester City Region, and expect to have some exciting announcements in the coming weeks and months.”

Between them the first 10 sites have a finished development value of circa £134m and are contributing in excess of £7.3m to local communities in Section 106 and Community Infrastructure Levy payments.

Although in its relative infancy, Anwyl Homes Lancashire can draw on more than 90 years’ experience of its parent company, the family-run Anwyl Group.

“It’s the best of both worlds really,” John explained. “We have the advantage of being a new name and bringing something fresh and new to this part of the country; yet, at the same time, we can give customers the reassurance of knowing they are dealing with a successful business that has been around for over 90 years and has built up a reputation for thoughtfully designed, quality built new homes.”

Based at Buckshaw Village, Chorley, Anwyl Homes Lancashire is on target to legally complete 275 new homes in the financial year to September 2022; this, from a standing start when it announced the acquisition of its first site in Prescot, Merseyside in June 2017.

“Beyond this we’re forecasting continued, steady growth, with targets for the next two years which see the business achieve in excess of 400 legal completions by 2024,” John added.

“Whilst central Lancashire remains our home base and very much our ‘heartland’, we’ll continue to build on our successes in Merseyside and West Lancashire and are keen to reciprocate this in Greater Manchester too.”