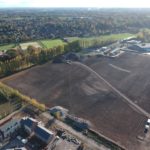 The latest land acquisition by Anwyl Homes is part of a mixed-use project transforming a redundant industrial site in Winnington, near Northwich, Cheshire.

Anwyl has bought two parcels of land at the Winnington Business Park site, off Winnington Avenue.

Helping to create a brand new community, Anwyl’s homes will sit alongside a development of commercial space, retail units and a family pub/restaurant – planned by the site’s vendors FI Real Estate Management – all of which are replacing old industrial units that once formed the Avenue Engineering Park and an associated storage yard.

John Grime, Anwyl Homes regional managing director, said: “Our new homes, along with the smaller, modern commercial and retail units planned by FI, will be far more appropriate to this location. Our carefully crafted homes will help to facilitate the planned changes and provide a boost to the local housing supply.

“They will also add to Anwyl’s continued growth in this, our 90th anniversary year, and we’ll be making financial contributions to education, healthcare, highways, parks, play spaces and sports pitches. These will be worth around £1.2 million in total, depending on the final number of homes, including almost half a million pounds towards local education provision. There will also be 15% affordable housing.”

Winnington is an area of Northwich that has rapidly seen old industrial sites taken up for residential development, including the nearby Winnington Urban Village.

Northwich town centre is within easy reach and has benefitted from major investment; Greenbank Station is around a 10-minute walk away for services to Manchester and Chester; and there are good road links to the M56 and A556 making it a great base for those who work in Manchester, Warrington or Chester.

Anwyl is planning a mix of one, two, three and four-bedroom properties, including detached, semi-detached and mews styles, as well as some apartments.

Subject to detailed planning consent, Anwyl hopes to begin construction work this summer, with first occupations by spring 2021 and development phased over three to four years.