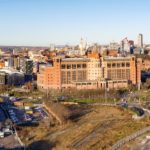 Plans have been announced to create a major new residential-led mixed use community on the East Side of Leeds’ City Centre.

To be known as Leeds City Village, the scheme plans to deliver over 1,000 new homes as well as a mix of commercial, leisure and amenity space. Situated at the former Marsh Lane Goods Yard it will incorporate a series of new buildings set within new areas of public realm and landscaped spaces.

The Rushbond Group, an award-winning Leeds-based real estate investor and developer, has come together with residential development specialist Gold and Amber, to bring forward the regeneration of this major development site.

The initiative is part of a masterplan which proposes a series of development opportunities to the East of the City Centre.  It connects into the wider plans for the regeneration of the Kirkgate District of the City and developments around Quarry Hill including the new Leeds City College Campus and Leeds Playhouse.

Mark Finch, Real Estate Director of Rushbond commented: “This is a massively exciting initiative to help meet the growing needs of an ambitious and dynamic City for quality new homes through a careful and considered masterplan over the full extent of the Goods Yard site – but, most importantly, connecting into and stimulating further investment into the East Side of the City Centre, supporting the growing creative community at Kirkgate alongside. The alliance brings together two companies with a track record of delivering high quality new homes in the City.”

Chris Austin, Managing Director of the Leeds-based architectural practice, Brewster Bye, who have been commissioned to design the masterplan, said: “This is a tremendous and exciting opportunity to expand the City Centre eastwards, through the delivery of an exemplar high quality mixed use development, which promotes stronger connections with the existing surrounding communities. It will combine homes, workspaces and amenities on a gateway site, which is seen by so many when travelling into the City Centre each day.”