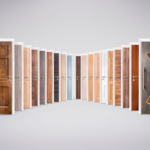 Doorset supplier Doorpac give their take on the importance of fire doors to the construction industry.

The primary purpose of a fire door is to safeguard human life. For the year ending Sept 2019, over 7,000 people were either killed or injured in a fire. Fire doors also seek to protect property by reducing the amount of physical damage caused, and so reducing the financial loss and disruption to business or family life. The most effective approach to maximising the fire safety of buildings, is to implement a planned combination of both passive and active measures. Fire doors form part of the passive measures to protect a building and its occupants whilst fire alarms, sprinklers and fire extinguishers form part of the active measures.

The principle behind Passive Fire Protection is to divide a building into individual fire compartments, constructed and lined with suitable fire resisting materials to reduce the spread of fire. If a fire should occur, the structure is protected as the fire is contained for a period of time within one compartment, thus reducing fire spread through the building by limiting the movement of flame and smoke. Containment of fire through effective passive fire protection serves to minimise the damage caused by a fire by protecting the routes of escape to ensure that the building’s occupants can leave the building safely. The level of protection provided by a fire door is denoted by its fire rating. The most common fire ratings being FD30 and FD60 meaning they have been tested and provided 30 minute and 60 minute fire resistance respectively.

A fire door has a critical role to play in any passive fire protection plan. A doorway is considered a weak point in containing a fire as it represents a break in the fire protection products within the wall. A door also requires a gap between the frame and the leaf and often includes metal components that conduct heat. A fire door is an engineered safety device that requires all of its components to fulfil their roles for the door to achieve its function.

All components within a fire door are required to adhere to the local Authority Having Jurisdiction’s product certification requirements and meet the requirements of the local building code and fire code. Different countries have different regulation requirements but in the United Kingdom a fire door should be put through a British Standard Fire Test BS 476 Part 22 1987, or a BS/EN 1634-1 2000 test. The results are recorded by the test agency and collated into a report containing information regarding constructional details, pressure readings and distortion data.

For a fire door to maintain its certification it must be fitted into a frame and with the ironmongery specified within its fire certificate. Purchasing a fire door as a doorset, complete with ironmongery from a third party accredited manufacturer will ensure that all of these components are within specification. A fire door does not necessarily have to be non- combustible to be effective. Parts of the door can be destroyed during exposure to a fire as long as the door limits the temperature on the non fire side of the assembly. Fire doors are required to delay a fire moving from one area to the next so regardless of how much of the door arrangement is left, if the fire is contained it has done its job.

Third party certification involves the testing of the door as a complete assembly, including door leaf, frame, ironmongery, intumescent seals and glazing. Regular testing and audits are required to complete the certification process and certificates are issued, indicating the scope of the certification. It is these measures which ensure the product supplied meets and maintains the performance of the original design.

Hopefully you have gained an insight into the importance of fire doors and how the use of doorsets supplied complete with ironmongery can help ensure your buildings passive fire protection products perform as designed.